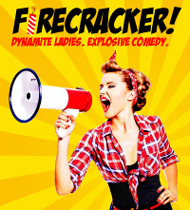 Nestled in the quaint setting of Granville Island, ‘The Improv Centre’ was the perfect setting to host Firecracker! As eluded by its name, this event was truly ignited by an explosive cast and performance that pleasantly contrasted the picturesque and serene setting that we know to be Granville Island.

While Improv generally is inspired by random shout-outs by the audience to lead the plot, this event was unique in that it explored the theme of what it means to be a woman in Vancouver, including dating and romance, career and work/life balance, female friendships and body perception.

What is the true definition of the Vancouver woman? It’s safe to say that she embodies different stereotypes, which were well represented by the various improvisers ranging from the young artsy urbanite to the middle age mother who has a lot on her plate. Unlike traditional Improv, this event utilized different mediums apart from just audience ‘shout-outs’, which included a silent black and white video where the improvisers filled in the dialogue based on their cues.

I enjoyed this performance and while I might be biased growing up in Chilliwack, I appreciated how they incorporated the Lower Mainland woman as part of the collective of what makes up a Vancouver woman. The Improv itself was well done and the testament of this was the laughter spurring from the audience that was clearly not forced and the tears of glee rolling down numerous audience members’ faces as the jokes unravelled.


While it was clear that it was the special guest’s first time doing Improv, the cast carried her through the performance and reminded us all that even if we aren’t trained Improv professionals, thinking on one’s feet is a life skill we can all work on. This specific performance was slightly geared with some of the opening scenes towards a younger audience given the special guest was a social media blogger, however this didn’t seem to pose an issue amongst the diverse audience. By visiting the VTSL website (vtsl.com), future attendees can gain a sense of the focus of each unique performance based on the diverse experience of the special guests (Film, Music, Burlesque, Comedy and more).

It was apparent with all the smiles and giggles of the audience exiting the venue that everyone had a fabulous time. If you want to light up your summer’s night with uncontrollable laughter, and you are feeling adventurous to be part of an event where the audience leads the performance, I would recommend giving Firecracker a definite shot!