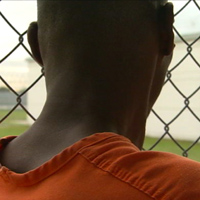 What a unique and comfortable room to watch the documentary film The House I Live In. We are seated right in the centre of the Council Chambers of the Richmond City Hall.

This is a great informative documentary and one that will shake your tree if you are an American or Canadian citizen. Although the film is not off to a good start with the sound not working and with the beginning of film being more gritty than informative, this documentary film turned out to be amazing.

The House I Live In focuses attention on the ongoing drug war and especially to these poignant facts: It is up to us to solve the problems in our legal system and to decide what we should do about our federal government. Simon makes us aware of the ridiculous penal system we have in place and what is going to be in place with our penitentiaries in the future if we allow it to continue unaltered.

This documentary presents truths that are very scary because it affects innocent people as well as the guilty. There is great disparity in the sentencing between blacks and whites and those who are poor. We are shown a man given a life imprisonment for possessing 3 oz. of crack. The man had lost his job and had to face the reality that he has children to support. This black man could not find work and felt that he had no choice but to try and sell drugs. He had no prior convictions.

Police are given points for arresting those involved with drugs, which by the way involves many innocent people just because they (the police) are trying to make their status quo. The more points an officer scores the more likelihood that he will be promoted over a detective who solves one murder case per month. It is much easier to rack up status quo with people involved in drugs or reportedly in drugs than all the other crimes put together. A man is arrested who walks down a street and suspected of possibly going to acquire drugs, and yet there is absolutely no proof of such an act taking place.

Even though this documentary is about the United States we have to question what our Prime Minister Stephen Harper is doing to our legal system. More and more penitentiaries are being built and more and more people are being put into them. The more that are built the more money large corporations will make building them. The United States is 5% of the world population and yet has 25% of the world’s prisons. There is definitely something wrong here.

I can see why this film won The Grand Jury Prize at the Sundance Film Festival in 2012. If we need a wakeup call then here it is. This is a definite thumbs up film. As many people as possible should see it and observe the dirty secrets that could affect all of our lives.