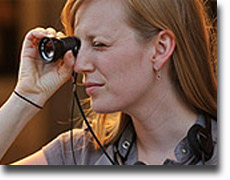 Sarah Polley’s own sister Joanna states early on in this film, “Who cares about our stupid family?” The question is obviously rhetorical, but even if we didn’t all have a bit of a crush on the precocious Sarah Polley, most viewers will find themselves captivated by this beautiful and inventive film.

Stories We Tell is a documentary that bravely (especially considering Polley is a self-described ‘private’ person) confronts family secrets and lies, while also illuminating the nuances and dynamic nature of storytelling and memory. It is also a carefully affectionate tribute to Sarah Polley’s late mother Diane Polley.

The story is revealed through interviews with siblings and outliers, and Super-8 home movie footage (both real and staged). Sarah’s father Michael Polley also lends writing and narration to the documentary, giving it a well-rounded portrait of a beautifully complicated mother and wife.

I so loved and connected with Stories We Tell. Had I been viewing it at home, I would have been tempted to stop and rewind several moments, sometimes simply to re-watch a captivating facial expression here and there (particularly during the parts with the Polley siblings – these interviews were intimate, funny, and charmingly self-deprecating).

Polley describes her mother as “incredibly vibrant, charismatic, always fun, full of energy, disaster prone”. Through stories and images, Diane’s magnetism comes through palpably, as does Sarah's own devotion and attentiveness to representing this story in such a wonderful, tender, and emotionally complex way.

So much of this film’s story resonated with me, and I can’t imagine it wouldn’t resonate with most others. It’s a story about family, of love, and the choices we make for better or worse. What we often don’t realize is that of course we’re interested in each others’ ‘stupid family stories.’ It’s in the telling of the story that bears the challenge, and I think that Polley’s Stories We Tell has received much well-deserved recognition as being successful in this regard.

Featured in the film is Harry Gulkin, who at one point states that “you need witnesses to confirm it,” when re-telling the story of his time with Polley’s mother. This is in effect what the film does; it confirms the memory of and bears witness to a story, from which a rich tapestry is woven. So even if none of the tapestry’s threads resonate entirely with you, at the very least you might enjoy the quirks and singularities (or perhaps even facial expressions) of each storyteller.