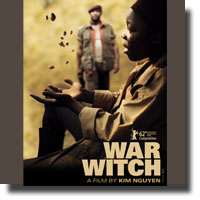 Rebelle (War Witch) is a poignant drama of bare bone, basic survival. It truly deserves to be nominated for Best Foreign Film at the Oscar’s. Tonight’s screening is sold out at the VanCity Theatre.

This story takes place in the Democratic Republic of the Congo. Komona is played by Rachel Mwanza, in her debut performance, and she gives a magnificent portrayal of a girl who is forced to commit horrific atrocities. Rebelle, a film about a young 12 year old girl’s fight for survival, is moving. Komona must become a guerilla fighter after being forced to kill her parents and then being taken from her home.

After surviving an attack in which most of her fellow fighters are killed, Komono is perceived to be a witch and soon is held in high standing in the band of fierce killers (many of whom are also children).

There are many unique attributes in this film. Rebelle has very little dialogue and a great many subtleties are attained through actions. It makes many modern films look plastic in comparison. Blood, guts, gore and sex were implied and not overblown as in many Hollywood movies. There appears to be an absence of ego between Komona and a male companion, who eventually becomes her husband (Mizinga Mwinga).

We learn what truly “being” really is. It is a world of severe poverty, violence and no one to impress. The acting is unbelievably believable. We are told that that the actors did not follow the script at times and did what came naturally, so amazingly the actors closely aligned to the original script. In doing so, the acting appears natural. Although there is a great deal of violence and meanness in this film, there are also good kind people to help Komona through her suffering.

I appreciate what I have in my life more fully after seeing this film. It makes me think “What if I wasn’t born in Canada?” It has the power that sends my thoughts into introspection. My heart goes out to these children who are forced to live in violence and die in violence. I am thankful for where I live, a roof over my head, food to sustain me, and no fears to cause nightmares and sleepless nights.

Good luck to Kim Nguyen and his production crew on Oscar night.