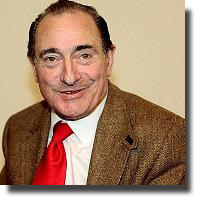 Over Christmas, I had the enjoyment of seeing the Pierre Étaix double bill at Pacific Cinematheque. Previously somewhat unaware of his films, I was pleased that the 1960s double bill offered great humour and depth for an audience who would still find the films’ themes both entertaining and still highly relatable.

In the short film Happy Anniversary (running time: 12 enjoyable minutes), we see a husband – played by Étaix – trying to pick up flowers and run errands in a rush to get home for his anniversary dinner with his wife. There is no shortage of silly and absurd distractions and unfortunate setbacks, when upon arriving home he finds that his wife has accommodated his tardiness in her own way, a situation that hits unnervingly close to home for this reviewer. Lots of giggles and a cute (if not somewhat odd) ending.

Originally entered into the Cannes film festival in 1969, Le Grand Amour has more depth than the preceding short film, and less silliness. Reminiscent of the 1955 American film Seven-Year Itch, the story explores the always-relevant theme of growing restless with the old comfort of your spouse, and being lured by the temptation of young beauty and new romance.

Étaix plays with this theme nicely, albeit somewhat overly sentimentally (which would have been appropriate during its time, in order to preserve the lightheartedness that this genre requires). Even more adorably, Étaix’s character’s wife was played by his own wife-to-be, Annie Fratellini – whom he married shortly after making the film and was with until her death in 1997. Though the film’s adage can be presumed quite easily, Étaix still uses several unique comic devices to tell this age-old narrative and gives it a lovingly and wholly new context.