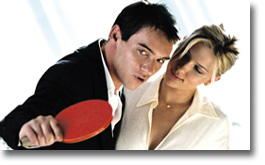 Match Point has been lauded as one of Woody Allen’s finest films, and it is not difficult to see the master at play in such details as his steadily progressive close-ups and edgy camera angles designed to accentuate the furtive avarice, naked lust and gradually emerging amorality of his artlessly guileful anti-hero Chris Wilton (Jonathan Rhys-Meyers). This film was shot in London where Wilton is a tennis pro whose upward mobility works to his advantage when he shares his love of the opera with one of his clients, Tom Hewett (Matthew Goode) who invites him to join his fabulously wealthy family for a night at the opera. Tom’s sister Chloe (Emily Mortimer) is soon smitten with Chris. Before long they are sharing more than mere meaningful glances. Allen handles romance exceptionally well, from comfortable coupling to steamy libido lust.

Enter Nola Rice (Scarlett Johansson): an aspiring actress who is also Tom’s girlfriend. And before long the kettle is boiling. If Chris and Chloe’s love-making appears comfortable, Chris and Nola make a passion play for each other that steams up the entire screen. After a brief hiatus when Nola and Tom break up and she leaves town, Chris finds her again and they rekindle their torrid affair.

Johansson has some amusing lines, and she is believable as the coy ingénue; less so as the vulnerable insecure actress out for an audition, and stellar as the smoky seductress; but once the passion runs its course, and she is relegated to the clingy mistress role, she cannot help but come off as a bit shrill and shrewish. Not that this justifies Allen’s last resort.

Goode does an admirable job of oozing poise, privilege and good breeding. Mortimer does a decent job of acting as the dutiful little sister, and her role as the oblivious Chloe Hewett Wilton provides a healthy reminder that some wives really are the last to know with eyes wide shut.

Even though it pulls in heavy numbers for the operatic soundtrack, the opera in Match Point barely rises above a kind of tacit nodding reference a la Mary Lambert lip-synching opera in her latest “Secrets” video. Match Point’s opera is obviously not as gimmicky, and certainly sets the tone, but it is not entirely contrapuntal in any kind of coherent, logical way, either. Admittedly, it is hard to beat Caruso for creating a mood, but scoring the entire Act II Otello / Iago duet as a juxtaposed backdrop to the famous final scene makes for a kind of a bipolar climax. Whatever tragic betrayal plays out between Chris and Nola is pretty much a lob of lust strategically designed to set up a vital volley of avarice (to take things back to tennis—and ethics). Securing the opera—linchpin-like—to the plot, Allen is essentially glamorizing an amoral, atheist philosophy in a be-whomsoever-you-want-to-be-without-shame masquerade of timelessness.

Allen’s film ends with an excellent crowning piece of poetic injustice that echoes and highlights the frozen frame used to open the film. Ultimately, it begs the question about luck and fate trumping goodness and faith: what will be the outcome of the net ball of life? Who will win the Match Point?