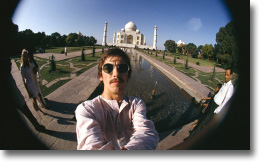 Film-goers are seldom encouraged to read between the lines in quite as creative a manner as that presented within the first and final few minutes of George Harrison: Living in a Material World. Martin Scorsese bookends his extensive biography with shots of the most spiritual of the four Beatles peering through carefully arranged rows of tulips. Known more for musical rather than floral arrangements, George Harrison has had a significant hand in arranging, or perhaps even orchestrating some of the most profound cultural events of our time. This film goes a long way down that winding road.

To flesh out his film portrait of George, Scorsese draws heavily on a myriad of fabulous stills from seldom seen archival collections, as well as miles of rare film footage of not only the early Beatles, but also George’s solo work. In addition to these visual reminders, insights are provided in the form of rare and candid television interviews of fellow Beatles members and former collaborators and mentors like Tom Petty, Eric Clapton, Billy Preston and Ravi Shankar, to name a few.

Although these interviews add an incredible dimension of authenticity to this film, one cannot help but get the feeling that many gaps are left for the viewer to fill; to read between the lines. (And that is not just because the film makes no mention of Harrison’s Cloud 9 album).

For instance, there is George’s first wife, Pattie Boyd’s representation of her affair with Eric Clapton, poignantly presented in halting emotional tones as an interlaced version of Harrison singing “Isn’t It a Pity” reminds us of how “we break each other’s hearts and cause each other pain.” This is vastly different from the casual riff on free love presented by Clapton as he tells his side of the story. The truth could and has filled books, the film highlights nuances.

Always, and everywhere, throughout the entire film is the music: the songs, the lyrics and the performances. Fame is represented as a relentless force one cannot control unless one retreats from the material world into a spiritual existence, like George sought to do.

George’s music increasingly became a source of spiritual solace for him. His spiritual search led him to view home and family as a comfort and a retreat. This film captures well the price he paid for fame and the friends he made along the way.

One such friend, the race car driver Jackie Stewart, uses the metaphor of how your senses are heightened in a race to describe what George must have felt playing guitar during a peak performance.

Another, director Terry Gilliam, recounts how George would recoil from the creative bickering that was so typical of the Monty Python team involved in movies Harrison produced. Perhaps it reminded him too much of his final work with the Beatles.

Still another, guitarist Tom Petty, recalls a phone conversation he’d had with George on the occasion of Roy Orbison’s death. “Don’t worry. He’s still around. You’ll still hear from him,” George said.

Living on in film and musical recordings is one thing. But having made an impact on the lives and in the hearts and minds of those closest to you is quite another.

As George’s widow confirms in the closing frames of this moving and eloquent film, even if you were to have filmed his death, you would not have needed lighting. He lit up the room. Not everyone would have agreed with all of George Harrison’s choices, but this film reveals how his legacy often transcended them.