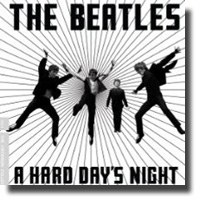 There is nothing easy about sitting through A Hard Day’s Night. At 87 minutes it is nearly an hour and a half too long. When one is not stifling yawns at the pimped-out-precocious antics of the Sixties antidote to artlessness—a double dose of artless guile—one is fighting back the nausea over seeing frenzied teenage fans (mostly girls) losing their battle with self-respect as they go Ga-Ga over the Fab Four.

It is hard to say what is worse: the hiss-hiss-histrionics of the Beatles as they peddle their cutesy personas to the gullible masses or the ho-hum-hysterics of their none-too-subtle fans. This movie is merely one long series of inter-related music videos: short on plot, long on catchy-if-your-bitten-by-the-Beatle-bug singles. The music admittedly makes viewing this movie feel a little less like an endurance test. But not much.

There are to be sure a few good comic touches. Paul’s stand in gramps and his tomfoolery is not one of them. George’s amusing derogation of the ‘trendsetter’ hired by a local fashionista who mistakes him for a male model is a droll piece of meta-ironic humour. But most of the attempts at cleverness don’t come off as well. It’s like John’s one-liner response to the touchy conservative fall guy on the train who says he fought in the war for the likes of them: “Bet you wish you lost.” The truculence of this flippant insouciance may be pretty close to who John really was, and then again, there but for the touch of fame goes a public persona smothered in some kind of smarmy but biting satire.

Don’t go to this Hard Day’s Night expecting anything more than a feast of gags and shenanigans served up as groovy gravy for groupies, because this is nothing more than an immature response to ample doses of adolescent adulation. And I take that back about the music. These are only a few good songs enlisted in the aid of a bad cause, prompting this reviewer to make a snappy rejoinder to John’s previously-mentioned curt come-back: “Bet you wish you had all become brick-layers.” Then again, maybe that’s the kind of response John and the boys had in mind all along. Maybe now that John knows the answer to the question about whether the Beatles were ever more popular than Jesus, he’s now a Roger Waters fan. Because all in all, A Hard Day’s Night is just another brick in the wall.