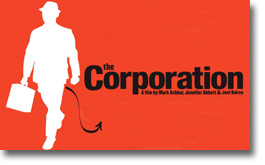 It has been a decade since The Corporation won the World Cinema Audience Award for a documentary at the Sundance Film Festival, and perhaps the most apparent among the significant changes that have been made to the film is that it has been shortened by approximately 25 minutes. But it still seems long. Not that it doesn’t hold your attention. It is an intellectually and emotionally compelling piece of cinema that draws the audience out of complacency by gradually unveiling a grim, sordid portrait of corporations as psychopathic personalities who lie, cheat and steal human rights and whatever else gets in the way of their obsession with improving the bottom line.

Recent attempts by corporations to develop a social conscience are all but dismissed as window dressing. Among the many short interviews featured, only Ray Anderson from Interface carpet and fabric company comes off as genuine. His metaphor of climbing mount sustainability (which he says is higher and more difficult than Mount Everest) is both authentic and an arguably worthwhile goal. It is a flaw of the film that no other Corporate CEOs were interviewed.

Other interviews include notables such as Noam Chomsky, Naomi Klein, Michael Moore, fall guy Michael Walker from the Fraser Institute, and Milton Friedman. Perhaps the most outrageous case study of many shown was that of the Monsanto Company promoting Posilac to enhance milk production in dairy cattle. When two journalists exposed this as harmful to cattle, the cover-up and ensuing lawsuit involving the Fox Network and Monsanto is an egregious example of the depths that corporations will sink to in the name of corporate greed.

One of the best presentational methods this film uses is the gradual unveiling of a personality profile of the corporations, all of whom are shown to have no conscience when it comes to pursuing an agenda for the sake of a profit that is contrary to public interests. As previously mentioned, the profile unveiled is that of the psychopath.

At one point in the movie an old rusted automobile chassis is shown underwater. The diver with the camera captures colourful fish swimming in and around the ancient hulk of a car. The implicit message seems to be that corporations will, like this aging wreck outlive their usefulness and end up out of their element, objects of disdain if not downright disgust, held up to ridicule and dismissed as useless relics of a bygone era.

Then again, they may take over the world. This appears to be one of those you-write-the-ending scenarios. Let’s hope we’re all not too apathetic and indifferent to get it done.