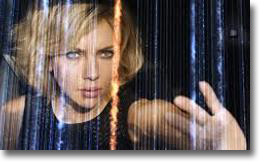 Lucy needs some explaining. It is unquestionably Luc Besson’s best film to date. And that is not some cheesy afterglow sentiment derived from a kind of sense like that old proverb about how “distance lends enchantment to the view.” The farther you get from Lucy the weirder it gets. The heroine is of course a modern day “belle dame sans merci.” She’s been deeply wronged, physically abused, and is out for a healthy dose of retributive justice—which she ends up securing in a surprisingly satisfying manner.

From the opening few minutes through the intensely dramatic climax, this film is non-stop action. Even the professorial lectures from the neurologically-minded Professor Norman (Morgan Freeman) are intriguingly illustrated with a series of rapid-fire national-geographical-style documentation. Norman’s contention is that we only use 10% of our brain capacity, and were anyone to use more or even all of its capacity, amazing things would begin to happen in the life of that individual.

Lucy is forced to become a drug mule for the mob and after an attempted rape, she is kicked in the stomach repeatedly (not easy to watch). This abuse causes the super-drugs to leak into her system, and she begins a fabulous journey towards “a sense sublime of something far more deeply interfused, whose dwelling is the light of setting suns, and the round ocean and the living air, and the blue sky, and the mind of man: a motion and a spirit that impels all thinking things, all objects of all thought, and rolls through all things.” Don’t get me wrong. She doesn’t begin to channel William Wordsworth. But there is definitely a pantheistic philosophical underpinning that permeates what happens to Lucy as she moves from using 10% to 100% of her brain capacity.

Morgan Freeman doesn’t have a very significant role, and one gets the sense that the scientific component was a bit of an afterthought. By the end of the movie, after Lucy weaves what Tennyson once called “a magic web with colours gay,” she ends up as some deific persona in Freeman’s office amid a selected group of his brilliant scientific colleagues, about whom she miraculously knows everything. But there has been no significant connection between Professor Norman and Lucy, so the sudden seeming affection that arises between them appears contrived.

Equally contrived and awkward is the scene from earlier in the movie when Lucy is forcing surgeons to remove the packet of drugs from her body without anaesthetics while she talks on the phone with her mother about her childhood memories. This obvious attempt to enlist further sympathy for a protagonist who has already proven she merits our sympathy is a ploy that lacks sophistication and subtlety. Ms. Johansson’s acting is increasingly robotic as she gradually begins to control more and more of the external world—eventually even time and space. Naturally, no-one can relate to the extent of her domination, but it seems the more knowledge she accumulates, the less emotional she becomes. That is why the surprising kiss in the middle of the movie is so ironic; again, almost an afterthought—a humorous nod to the so-called second-hand emotion in a movie that is entirely devoid of romance. This belle is not only sans merci (to her adversaries), she is also sans sentiment.

We need not worry about humankind only using 10% of their brain potential here, because this movie requires significantly less than this, and nothing believable “ends this strange, eventful history,” even though it ends dramatically and amusingly well. So, Besson delivers on the action and special effects, but his plausible portrayal of nuanced characters leaves a great deal to be desired.