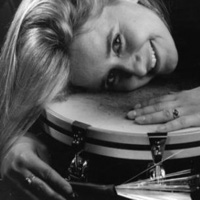 Tonight’s Drummer Girl is a successful performance with Lauri Lyster and her well chosen band of seasoned musicians. She gives us a new slant on the development of percussion. Lyster is relaxed and humorous with the group and together they present an earthy spontaneous performance.

Lyster tells a story about how her life as a drummer that began with its ups and downs. It's tough to be recognized as a female drummer, but she did it. She talks about a funny episode as a member of the Vancouver Opera Orchestra in which her water bottle took on a life of its own and bounced down the steps while a female opera singer was singing quieter notes.

What stood out this evening was the great voice of Kat Wahamaa. This gal could soon be making her own gold record with that sultry, sexy voice. She really impressed me. Rene Worst on bass showed us what being a great bassist is really about. The musicians play well together and the last song of the evening, a Celtic piece, was beautiful. A couple of the other songs seemed a bit disconnected in their composition but not the musicians. They play what is there.

With tongue-in-cheek a whole myriad of objects are used to produce repercussive sounds, such as pails, and an assortment of children’s toys that squeak, buzz and whirl. Throughout the show, Lyster, in her bare feet, changes costumes right before our eyes with a come-what-may fun attitude.

This group of talented musicians are on until February 22nd.. If you want to hear a new spin about the life of a musician do come down for a pleasurable evening with The Drummer Girl.