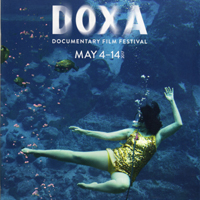 Dates and Venues May 4-14, 2017 | The Vogue Theatre, VIFF’s Vancity Theatre, The Cinematheque, The Orpheum Annex, SFU’s Goldcorp Centre for the Arts, and the Museum of Vancouver 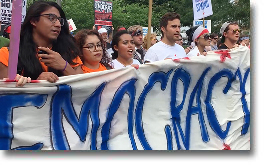 Jacob Smith and Jon D. Erickson’s ninety-minute documentary is essentially about a progressive movement in the United States, or perhaps even a step further - profligation by the 99%. On the surface, Waking the Sleeping Giant, appears to be the American version of Michael Winterbottom’s 2015, well received film The Emperor’s New Clothes. As with the Brit doc, Smith and Erickson’s film is certainly captivating, but also complex. “The Giant” that is referred to is, of course, American mainstream that isn’t prepared to take much more exploitation from the economic ruling class before they start pushing back and according to this excellent film – have already started.

The film, which features a fair bit of footage from Vermont Senator Bernie Sanders’ presidential nomination campaign, is easy to watch, and even easier to identify with. Watching Sanders on the hustings, one wonders why he couldn’t have pulled off the Democratic nomination. The film, however focuses less on Sanders, but rather more on ordinary citizens like Sabrina Shrader, an anti-poverty advocate from West Virginia and Angeleno Jan Williams, a seeker of racial justice through Black Lives Matter.

The documentary clearly illustrates (as if it were needed) how “Trickle-down economics” brought about by the Reagan philosophy of allowing the rich to get richer has only served to further corruption among bankers and wage stagnation for the middle class. 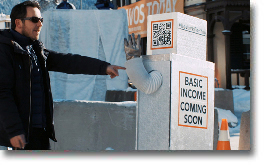 In English and German with English subtitles

President Ronald Reagan once casually remarked “there is no such thing as free lunch.” What Reagan really meant was that there is no free lunch for you and me. Christian Tod’s ninety-minute documentary, oddly titled Free Lunch Society, examines a movement promoting a basic income for those workers displaced as a result of technological advances in manufacturing, and eventually other industries.

There are models that have already pursued the notion of people receiving public funds simply to exist. Alaska’s Permanent Fund Dividend ran from 1976 until 1980 and provided every man, woman and child an annual monetary dividend. Mincome was a Canadian/Manitoban experiment that ran from 1974 until 1979 and provided a guaranteed annual income to a random section of the population to measure the social impact an unconditional income would have.

According to Tod’s film, political and moral justification of a basic income is founded on the premise that wealth generated from a country’s natural resources belongs to everyone. The film features interviews with billionaire businessman and an advocate of basic income in Germany, Götz Werner, who points out that the idea of a basic income is a policy whose time has now come. Naturally the economic elite are opposed to the notion since they would less power over their employees.

Film maker Woody Allen, in one of his more insightful moments, commented (and this is mentioned in the film) “Money is better than poverty, if only for financial reasons.” The film's objective is well reasoned and offers food for thought, but can it be as “boldly simple” as getting money for nothing? 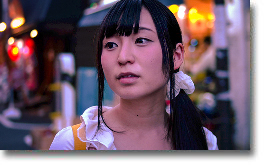 In Japanese with English subtitles

Filmmaker Kyoko Miyake’s quirky documentary offers an examination of the ”idol” phenomenon and the part it plays in contemporary Japanese culture. While “idols” can be boys or girls, Miyake’s film concentrates on young girls between pre-teen and early twenties who perform in groups or as soloists for a predominately male fan base. One of the film’s subjects is the ebullient Rio Hiiragi who looks even younger than her actual age of twenty. Rio claims to look upon her fans “as her children” though in fact, many of them are old enough to be her father or even grandfather.

Post concert “meet & greet” sessions are mandatory. The girls are programmed to be flirtatious and the brief confabs provide the artist’s fandom, which often border on obsession, an opportunity to get a ‘selfie’ and handshake with their idol. While one could suppose that these events might encourage stalking, it appears to be less of a concern in Japan than inNorth America.

Those who are entirely fixated on following these “idols” are referred to as otaku. Mitacchi is a single, middle-age transportation worker who spends all his disposable income and most of his free time attending concerts and buying associated merchandize. As one of the film’s contributors suggested, Japan’s two decade, underperforming economy may be the cause of this peculiar sub-culture. Without the prospects of being able to support a wife or even a girlfriend, men are finding a convenient emotional substitute in following their “idols.” 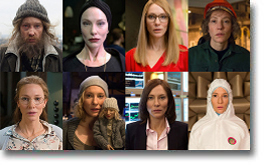 Less a documentary than an art project, Manifesto is German video artist Julian Rosefeldt’s full-length compilation version of his 2015 multi-screen installation. Shot over just 12 days in various locations around Berlin, production design Erwin Prib deserves much of the credit for such a quality product seen on screen. It doesn’t hurt to have Nils Frahm and Ben Lukas Boysen’s enigmatic industrial score providing a sonic backdrop.

Moreover, it certainly helps to have versatile Cate Blanchett playing thirteen roles in a dozen vignettes. Blanchett’s characterizations range from the Delphian to plain quirky and from arcane to sublime. With excellent work from her hairdresser and make-up artist, together with her own talent for accents the Australian actor effortlessly overcomes issues with the deliberate disconnect between her character’s predicament and the overplayed art discussion that forms the hyperbole dialogue.

The film can certainly boast excellent cinematography, particularly with aerial photography that might have been shot from a camera mounted drone. In terms of a viable commercial release, with the possible exception of the Art house circuit, I wouldn’t predict much success, but it may be better received as a feature in film festivals. 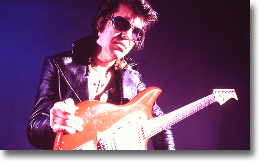 Rumble: The Indians who Rocked the World

Catherine Bainbridge’s Rumble: The Indians Who Rocked the World is a musical documentary that is both informative and thoroughly entertaining. The film’s title comes from Link Wray’s iconic 1958 instrumental hit that may be the only piece of music without lyrics banned from radio airplay because of perceived negative influence on young listeners. The film features concert performances from some of the finest Native American musicians and interviews from well known international artists such as: blues artist Taj Mahal, former Band member Robbie Robertson, Cree singer-songwriter Buffy St. Marie and punk pioneer Iggy Pop.

The film shows that Native American musicians, even the successful ones, haven’t always been given the credit they deserve. Robbie Robertson, who is part Mohawk and raised on Six Nations Reserve, was advised to be careful about flaunting his heritage. On the other hand Pat Vegas, who is part Shoshone, part Mexican, of the rock group Redbone had no misgivings about wearing traditional Native attire in concerts.

The film ends on a political note showing footage of protests by Standing Rock Sioux at the Dakota Access Pipeline site in North Dakota as Buffy Sainte-Marie performs a poignant protest song. 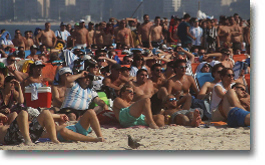 In English and Portuguese with English subtitles

"Praia" is a Portuguese word simply meaning beach. If you are going to spend two years people-watching, there may be no better place to do it than the crowded Copacabana Beach. Rio de Janeiro’s most famous beach draws the rich and beautiful from all over the world as well as the poorest from the city’s urban favelas.

The film starts with a young man with long, dirty blonde hair sitting on the beach having an unusual haircut. Passers-by, including bikini-clad young women, small children and male beach vendors are handed scissors and invited to take a few snips off his long tresses. We learn that the young man’s name is Guilherme. We never see or hear him on film again, but we know that it’s he that is behind the camera recording mostly mundane conversations articulated by an assortment of visitors.

Despite being shot between 2014 and 2016, an anarchic period in Brasil, the film is intended to convey a twenty-four hour time frame, starting with fireworks on a Monday evening, through the following day up to fireworks on a Tuesday evening. 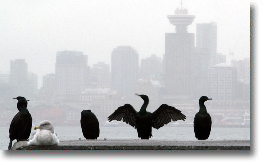 Charles Wilkinson’s new documentary Vancouver: No Fixed Address takes a short, hard look at the recent escalating real estate market in Vancouver. The film was released just in time for this year’s DOXA festival, but it may be already out of date by six months. There is no mention of British Columbia’s 15% tax on foreign home buyers. The City of Vancouver’s 1% additional levy of the property’s assessed value for homes that are normally unoccupied was only mentioned in passing by Mayor Gregor Robertson.

Musqueam playwright and activist Quelamia Sparrow is the first interviewee seen and also the last. Besides other notable influencers like David Suzuki, Senator Pau Yuen, realtor Bob Rennie and journalist Sandy Garossino the film solicites comments from ordinary citizens. All seem to agree that the extraneous demand on real estate in Metro Vancouver has its root cause in two issues: tax haven money looking for a safe place to invest and property developers turning real estate into an export commodity.

Vancouver residents who would prefer to stay rather than leave are finding ingenious ways of combating the prohibitively high cost of housing by resorting to “tiny houses” (small, portable houses of 500 square feet or less) and sharing accommodation with strangers.