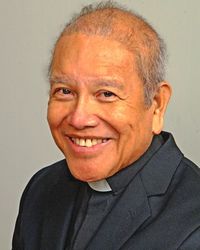 "Diptych" is defined by the dictionary as "an ancient writing tablet consisting of two hinged leaves with waxed inner sides". This is precisely what Father Gilbert Centina III meant with this bilingual book of poems: on the left side, the English version, and on the right, the Spanish.

Father Gilbert as he is commonly called has written and published this year (2017) his first bilingual book of poems. Centina is a priest, and has been a priest since 1975. He was born in La Carlota, Negros Occidental, Philippines in 1947. He is an award-winning author and has published two novels and seven books of poetry in English.

This bilingual book of poems is his latest and contains deeply religious poems such as Genuflection/Genuflexion, Faith/Fe, Saint Augustine/San Agustin and others.However, he also has non-religious poems, philosophical, I would say. His first poem in the collection is Noonday/Mediodia which reminds me of Robert Frost's "The Road Not Taken":

There are also poems tghat reflect his family: Letter to My Parents,To My Brother Pierce, Grandfather Slept, To Romeo Ramos Centina (a brother who passed away in 2011). His reflections on death are profoundly interesting. In "The Habit of Death", he writes:

Fr. Gilbert is serving now as a parish priest at Iglesia del Carmen in Neguri, Spain (near Bilbao). Diptych/Díptico was published by CentiRamo Publishing in New York. For more info and reviews of his book and other works, go to www.gilbertluiscentinaiii.com : .