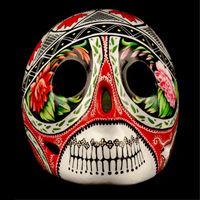 The shops and studios of Granville Island are hosting this year’s exhibit, a collection of handcrafted clay skulls that are decorated to represent the stories of over 15 artists and their countries. This is a self-guided walking tour so dress appropriately, where the skulls are showcased in the windows of the artisans’ shops with a description from the artist explaining their significance.

The Day of the Dead (Día de los Muertos, Día de los Difuntos or Día de Muertos in Spanish) is a holiday celebrated in many parts of the world, typically on November 1 (All Saints' Day) and November 2 (All Souls' Day). While celebrated globally, it is most recognized for its strong presence in Mexico.

With the Federation of Canadian Artists being the starting point, I was greeted with a map with all the locations that are participating by hosting the skulls in their windows – a scavenger hunt of sorts. I thought dispersing the skulls throughout Granville Island and not just having them in one gallery was a novel idea as it brings a sense of fun to the activity in tracking down all the skulls as well as a bit of exercise while you’re at it!

The exhibit was interesting in that while this celebration is known to have strong Mexican roots, the artists represented countries and cultures from all over the world, including South Korea, Tibet and France. The descriptions spoke to loss from a personal standpoint but also politically. Ari De La Mora spoke to the loss of his grandmother, a strong and courageous woman. Jose Urbay spoke to death in terms of the thousands of Cubans who fled during the Rafter Crisis of 1994 where many didn’t make it over the treacherous waters.

I found it also interesting what the thought out decorations within each mask meant to the artist. Bill Higginson from Australia placed mirrors in the eyes so that the audience can see their reflection and their life from a different perspective.
For those that are enthusiasts of this celebration, you will be pleased with this year’s collection. For those that are just thinking about checking it out, I think that you can make a full afternoon out of it by coupling it with shopping and lunch at the Public Market.

While the name of the event might sound dark, I felt rejuvenated afterwards as it is truly a celebration of life. As one artist put it, without life… there cannot be death.