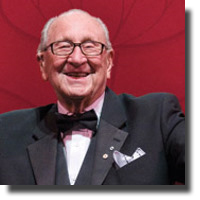 Dal Richards was born right here in Vancouver on January 5th, ninety-five years ago. If you can recall a time when he was not blowing his clarinet, his saxophone, or waving his baton, then you would have to be in your late seventies – at least! He is still very much a working musician and has no plans to stop.

The veteran bandleader was in fine form at his own birthday tribute concert last Sunday afternoon (13 January); no doubt buoyed by a standing ovation from a packed auditorium (when you’re 95 and a local institution, you get a standing ovation even before performing).

Mr. Richards took over the podium from Bramwell Tovey for an hour long set of his favourite swing numbers and jazz standards. He got people in the mood immediately with Glenn Miller’s “In the Mood.” This was followed up by “Over the Rainbow” elegantly sung by Caroline Markos, one of three featured female vocalists on stage.

Next up was popular jazz vocalist Jennifer Hayes with a bilingual (Spanish/English) rendition of “Sway.” It was then the turn of the band’s piano player Diane Lines to step up to the front of the stage with a sultry version of “Too Darn Hot” that made us all forget about the chilly weather outside. Ms Lines was also Michael Bublé’s pianist for a while.

Last of the celebrity singers Dawn Chubai, well known to those who regularly tune into early morning show Breakfast Television, pulled out all the stops with a ballsy rendition of Irving Berlin’s “Cheek to Cheek.” And Dal Richards showed he is still able to carry a tune with “As Time Goes By” from the film Casablanca.

There was a lot of good-natured leg-pulling at Richards’ expense from Maestro Tovey, who with the Vancouver Symphony Orchestra led off the evening with Jean Sibelius’ rousing Finlandia. The work is quietly patriotic and evocative of Finland’s czarist occupation.

The Maestro had mentioned at the beginning that he had wanted to play a selection from 1918, the year that Richards was born, but since the orchestra was only established a year later, he settled on a programme from the orchestra’s inaugural season.

Continuing with excerpts from Tchaikovsky's Nutcracker, the orchestra produced brisk tempi and streamlined textures. Dance of the Sugar Plum Fairy featured Linda Lee Thomas on the celesta (similar in tone to the glockenspiel, though with a more subtle timbre).

The Orchestra together with the UBC Opera Ensemble ended the first half with Giuseppe Verdi’s anthemic Chorus of Hebrew Slaves from his biblical opera Nabucco. The choir performed impeccably with uniform tone.

If music is the secret to longevity – play on!