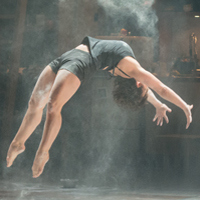 Cuisine & Confessions was built on the real-life personal stories of each cast member. Shana Carroll and Sébastien Soldevila, in charge of the Creation and Staging of the performance began with extensive story-telling sessions and extracted facts, themes, and images which they wove throughout each act, all based on these real stories. The original members of the cast came from different countries: Canada, Argentina, United States, Russia ; accents are thick and the music crosses borders.

The theatrical circus troupe was a break-away from Cirque de Soliel and relates its acrobatic and choreographic prowess to different themes. This time it is the kitchen. The performance is as unusual as it is inspirational. It is a fantastic attempt at connecting the heart of living (food) to the energy and vibrancy of the body (acrobatic energy).

As one enters the theatre, it feels smoky and the smell of garlic and oregano fill the air. Some performers have already started preparing the food while others interact with the audience making them feel at home in the 'kitchen'. The rest of the play continues this theme of cooking while performing fantastic acrobatic feats that are breathtaking. All the cast is skilful and perform their parts with artistic fervour and great cooperation between themselves. Their support of each other is to be admired as the play becomes 'whole' because of this. Some parts of the play are so full of action by so many actors that it is hard to follow all the players. It is their constant attention to each other that helps you to focus on the brilliant feats performed and to the constancy of food being prepared in this kitchen.

Sidney Bateman and Melvin Diggs' performances display artistic brilliance and discipline that is awe-inspiring. They sling their bodies through Chinese hoops with arrow-like perfection. Their life stories of childhood are also told making the play, personal and touching. Bateman has another act later where he mixes dance with his skill of manipulating a Chinese Yoyo. The audience is captivated with amazement as people clap their hands in rhythm.

Anna Kichtchenko's performance is also magnificent as she contorts her body and swings high and low in the air, suspended by a colourful tablecloth. She shows much grace and great talent.

Matias Plaul, in the grand final scene performs heart-stopping drops on a Chinese pole in between delivering a monologue about his father who had been taken by the Argentine military junta when Plaul was a baby. He alternates his monologue by swerving his body on the pole and plunging himself with death-defying movements that narrowly stop at the bottom, just before smashing his body on the ground. This signifies the horrible death his father suffered. In this way, he delivers an immensely moving and personal story.

Cuisine and Confessions activate all your senses. As the play closes, you are left with the inviting smell of banana bread ready for tasting. Delicious pasta and banana bread are served to all who wish to taste the result of all the cooking. This is a feast for the senses. It is a delight for the whole family and a performance you will remember for a long time.