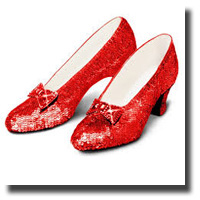 I was very fortunate to be able to attend the fabulous Hollywood Costume exhibit at the Phoenix Art Museum last Friday. The collection was organized by the Victoria and Albert Museum in London, and is a definite show stopper and a very pleasurable, visual experience. The exhibit runs through July 6.

The exhibit stitches together our first vision of a lot of the movie characters we have come to know and love. Clothes from more than 90 films are on hand, and we get to see how costume design is a huge component of the cinematic experience and as a film lover I was happy to see I had seen all but 4 of the movies. But the exhibit is more than just a view of some fabulous clothing – it is also a great multi-media event beautifully put together to hold our interest as we wander from room to room. I read that it took years to get these costumes together, as many of them were in the hands of private owners (like Debbie Reynolds) and because of their age were also very fragile and had to be handled with great care.

No boring mannequins here - static and just wearing a costume - but video clips, story boards, recorded interviews, props, notes and dialogue from both directors, stars and the designer accompanied the costumes. As the exhibit’s curator pointed out – a costume designer has succeeded if you love the film and have not noticed the clothes.

You enter as if you are going to the movies with a mock up “coming attractions” signage and go down a dark corridor where Sabine (from Moulin Rouge) greets you from her swing up high in the rafters.
The exhibit is set up in 3 acts - like any good play: Act 1 is Deconstruction – an intro to costume design in cinema and the creative process and how they bring a character to life through clothing. The designer’s notes to the Director and the Director’s thoughts back to the designer as they collaborate and piece together the final costume. The Second Act shows us more of the creative collaboration between film director/actors and designers. As an example, we were able to get up close and personal with Meryl Streep and Robert De Niro, who spoke via video clips of their experience and collaborations, and costumes from many of their films were on hand.

Act 3 showcased the most recognized and beloved costumes in film history. From Marilyn Monroe’s dress in The Seven Year Itch to Harry Potter, Indiana Jones and Dorothy’s dress and red shoes from The Wizard of Oz and costumes from films made as early as the 1920’s - it was a feast of film history and know how.

The show is a great opportunity to view how the costume helps shape the man (or women’s) character. Seeing Travis Bickle’s sunglasses and army jacket (Taxi Driver with Robert De Niro) was a great example…we know the haircut and attitude was vitally important to the character but these chosen clothing and accessory props added to the experience.

Everything from the Exhibit itself, the On the Red Carpet display of fabulous frocks the Stars wear to Premiers and the Oscars, the glossy 164 page give away brochure with great news about how the show was put together, the made for the event gift store (Dorothy’s red slippers and more) and the café where I ate “Iron Lady fish and chips (Meryl Street as Margaret Thatcher). If you are in the Phoenix area, go see it – it is a once in a lifetime experience for many who love movies but have not had the privilege to see some of these great costumes up close.