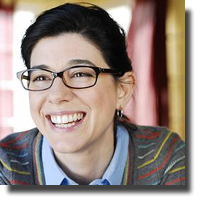 The title offers less truth in advertising than initially thought. There were actually only two “broads” (Judy Gold didn’t make it to Vancouver) and if Cory Kahaney and Dana Eagle were ever on “meds” they were still on them on Saturday night.

American stand-up comedians Kahaney and Eagle are as disparate in style as they are in their proclaimed methods of contraception. Ms Kahaney is fifty-ish, she has a daughter in her mid-twenties from a previous marriage and a son around seven with her current husband. She has a seasoned approach to humour much like Joan Rivers’ comedic style. Her schtick is focused on her perceived body image issues and jokes about what she knows best – her family.

Ms Eagle, who was up first, is roughly twenty years younger and is openly gay. She goes for a whiny, self- deprecating “throw-away” style targeting her own failings, men in general and occasionally Christianity; which would be fine if it was funny, but usually, it wasn’t.

Following a short introductory video projected on to a rear stage screen, the performers took to the stage separately and delivered a typical ‘Comedy Club’ routine. Cory Kahaney, a finalist in television’s Last Comic Standing, offered a more polished performance.

The audience’s response to both jokesmiths was generously supportive and encouraging, rather than total side-splitting hilarity (although, I have to say that the guy sitting directly behind me laughed at every line).

By the end of the sixty-minute plethora of low-brow comedy, I was unsure whether to grieve over missing Judy Gold, or be thankful that the show lasted only two-thirds of its scheduled run time.