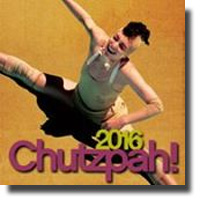 A Mexico City-based Klezmer band seems like an oxymoran, but Klezmerson’s followers – and they are many – have no problem with the band’s ambiguity. Over the septet’s (reduced to a quintet for this concert) decade long career, violist, pianist and composer Benjamin Shwartz has shifted the group’s emphasis from the swirling melodies of Klezmer and integrating the traditional form with a potent mix of Sephardic folk music, danzón and jazz fusion.

For their one and only performance at this year’s Chutzpah Festival, Klezmerson offered up two sets separated by a brief intermission. The first set focused on their recent collaboration with American avant-garde composer John Zorn which resulted in the acclaimed concept recording entitled Amon: Book of Angels.

Exotic titles like Iahmel, Yefefiah and Samchia represent angels (I didn’t realise angels could make so much noise). The band’s interpretation of Zorn’s compositions is closer to World Fusion than Klezmer and far too loud for a venue as small the Rothstein Theatre. Klezmerson supposedly perform many of their gigs outdoors.

Shwartz, the obvious leader, frequenly plays viola with his back turned to the audience. Presumably, he believes that it’s important for his band-mates to see what he is playing. Switching between viola and keyboards he combined with lead guitarist Federico Schmucler and the versatile Carlos Metta in a flat-out delivery of their brand of high-energy music. Regrettably, Carina Lopez’s cautious bass playing disappeared behind Schmucler’s over amplified guitar and Chali Mercado’s drums.

Things improved significantly in the shorter, more expansive second set that offered Benjamin Shwartz’s compositions (mostly) from their 2012 live album. Supersticion, No es por nada (It’s for nothing) and Seven – one of only two tunes to feature vocals - were played more spontaneously than in the earlier program. Even Carina Lopez’s bass lines that freely anchored the harmonic structures, were more natural.