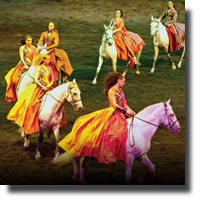 Montreal impresario Normand Latourelle personally welcomed media and special guests to a generous preview of Cavalia’s second production brought to Vancouver in less than three years. Latourelle mentioned in his opening statements that Cavalia typically would separate visits to a city by 4 to 5 years, but he was so impressed with Vancouver audience’s response to the first show that he felt compelled to return earlier.

So, how does Odysseo compare with A Magical Encounter between Human and Horse? Well, it has a more heroic theme. Latourelle describes his spectacle as “an epic journey across shifting terrain shared by horse and rider in a partnership.”

The show’s visuals are supported by bigger and better technical wizardry. Through an innovative curved screen that wraps around the rear performance arena like an amphitheatre, Odysseo presents a high-definition ‘3-D effect’ created by GeodezikTM.

Odysseo will no doubt amaze audiences with its instant pond. Near the end of the show, unseen pumps flood about 70,000 gallons (300,000 litres) of water to the lower arena, allowing rider-less horses to splash through the artificial lake.

But all the dazzling visual effects don’t distract the audience from the “real stars.” 67 horses and 48 artists have been brought to the Vancouver venue to share the ‘stage.’ Only stallions and geldings (no mares) are chosen to perform, representing about a dozen different breeds, including mostly Lusitanos, with some Andalusian, American Quarter Horses and Arabians.

Human performers, involved with both equestrian and non-equestrian events are a veritable United Nations, drawn together from United States, Canada, Brazil, France, Belgium, Russia, Spain and even Guinea.

In his remarks at the end of the pre-show, Normand Latourelle was at pains to stress the camaraderie and esprit de corps that exists between performers and production team.