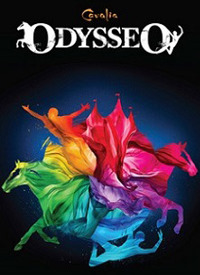 For several centuries humans and horses have shared a special relationship. It’s a phenomenon not lost on Cavalia’s creator and artistic director Normand Latourelle who knows something about large scale productions. Odysseo has a heroic theme that includes equestrian, acrobatic and musical elements. Latourelle has described the spectacle as “an epic journey across shifting terrain shared by horse and rider in a partnership.”

If that sounds like a noble motif, well, Cavalia has gone all out to make Odysseo a success. There are around sixty horses representing about a dozen different breeds, nearly fifty human artists drawn together from United States, Canada, Brazil, France, Belgium, Russia, Spain and even Guinea.

The show’s visuals are provided through an innovative curved screen that wraps around the rear performance arena like an amphitheatre. The high-definition video projections offer the audience the sensation of being in such exotic locations as: Eurasian Steppes, Arizona Badlands and the African Savannah while seated in a climate controlled tent.

The show begins ethereally with horses allowed to freely meander out of a forest background onto the open “stage” (Cavilia prefers to call the performance area a stage, even though its surface is sand and is separated from the audience with a small parapet wall). The pace of the show turns up a notch with the introduction of riders in the form of six young women in white gowns, each of them standing astride on the back of a pair of horses ridden at a canter.

My personal favourite ‘episode’ in the show is described as Liberté where the horses work without bridle or reins, yet respond appropriately to the commands of Elise Verdoncq, a female trainer who communicates to the horses in nothing much louder than a (French) whisper. The horses appear to show no signs of skittishness.

One of the most engaging segments is one that gives both horses and riders a break. Appel d’Afique (The Call of Africa) is a percussion laden, African influenced musical interlude that involves two set of siblings: Alseny & Idrissa Bangoura and Mohamed & Younoussa Sylla. They even managed to get the crowd chanting O Walu guere moufan! (No more war on Earth).

All the dazzling visual effects, super-human acts and even the enchanting voice of Valentina Spreca didn’t distract the audience from the “real stars.” The bond of understanding between horse and rider has to be absolute.

Save up to 15% discount with Promo code: SOCIAL
Website to activate promo code: cavalia.com/live