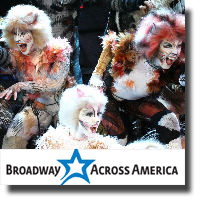 Plus an Interview with cast member Jamie Joseph

When Broadway Across CanadaTM comes to Vancouver, you can always expect a great show. And so it was last night on opening with a full house and the audience clamouring for more despite the over two and a half hour performance.

In recent years, BAC has been presenting shows for all ages: Annie, Beauty and the Beast, and now, Cats. This last one has been long-running for almost two decades. The last time I saw this musical was more than 10 years ago, and although I didn’t quite like it at that time because of a lot of “meowing”, this time it came out beautifully. I hardly heard any meowing at all. This version came out with more energy—the voices of the actors hit those notes with vibrancy and the choreography was fantastic. You’d think you were watching Moscow Ballet, especially with Mistoffeles (Chaz Wolcott) doing his pirouettes towards the end of the second act.

As always, the showstopper was Memory sung by Grizabella (Melissa Grohowski). What a voice! And it’s good to see a hometown boy in this cast too, Alonzo (Jamie Joseph) whose interview appears below. But the cast was marvellous, particularly the bad cat Macavity (Clinton James Sherwood) and the wise Old Deuteronomy (Nathan Morgan).

Based on Old Possum’s Book of Practical Cats by Nobel Prize winner T.S. Eliot, Webber puts music which hauntingly reminds me of some of the music in Phantom of the Opera. Eliot pokes fun at the foibles of humans by commenting on the state of human affairs through cats, similar to Aesop’s Fables.

The touring show runs till the 15th, so be sure you get your tickets before the shows get sold out.

Vernon, BC native Jamie Joseph is part of the Broadway Across CanadaTM touring company that blows into town this week for eight performances of CATS at the Queen Elizabeth Theatre. Audiences will see and hear Jamie in the role of Alonzo – well, actually they won’t see much of him; he’ll be wearing face paint and a furry cat costume, but they’ll certainly see a lot of his character. He’ll no doubt be dancing through the isles and when not occupying centre stage, preening himself off on stage left (or right).

I spoke with him by telephone earlier this week and he was genuinely excited about being in Vancouver; “for me, Vancouver is a great venue because it gives my family a chance to see me perform.”

The twenty-four-year-old artist started dancing even before he started school, when his mother, a ballet teacher from the Lynn Valley area of North Vancouver, enrolled him in tap dance. He admitted that “once I got over the anxiety factor, I really enjoyed it and now I’m grateful to my mother for encouraging me.”

After attending Edge Performing Arts Center in Los Angeles, Jamie got his first big break with an ensemble part in The Who's Tommy. It was a small role, but it gave him the opportunity to assist the Tony-nominated Alice Ripley with the choreography. The production also boasted Nona Hendryx as the Acid Queen.

When I asked him if there were any roles that he would particularly want to do in the future, he was initially hesitant. But after reflection, he thought playing the lead in a new production of a stage musical of Tommy might be fun.

When the CATS tour is over he will return to his home in Los Angeles – “I’m looking forward to getting back to teaching dance again and rejoining my friends on the beach until the next gig” – which shouldn’t be too long in coming. Jamie willingly admits he has had his share of luck along the way, especially with the support he gets from his family. Though, he doubtless has the talent to maximise on the opportunities when the breaks come along.

I’m pretty sure that when Walter and Mary Lou Joseph take their seats at the Queen Elizabeth Theatre this week, they will feel justifiably proud.