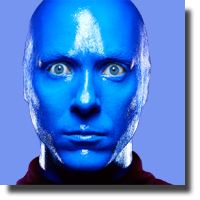 When Brian Tavener, Mike Brown, Russell Rinker and Ben Forster put on a latex head cover and plaster electric blue greasepaint over their head, face and neck, they might look like they're going to, or coming from a hockey arena. Only three ‘Blue-men’ take the stage for any single performance (the smallest number that can legitimately form a group) to deliver a product that fuses high energy stadium concert culture with Las Vegas razzamatazz.

Within a central theme, Blue Man Group (BMG) explores the 2-D virtual world as it contrasts with that of 3-D real world. They probe the concept collectively with non-verbal child-like curiosity.

BMG certainly provide an audience friendly spectacle that obviously draws repeat patrons. In the first of the Vancouver performances, I sensed that many attendees knew what to expect and engaged accordingly. Off-the-wall stunts like catching paintballs in the mouth, then spitting the colourful contents onto a bare canvas were definite crowd-pleasers.

The show doesn’t run flat-out, to-the-max for the entire ninety minutes. The pace evens out somewhat, when a couple of compliant audience members were plucked out of their safe seats and called upon to join in the fun onstage. One such instance requires a young man get suited up in white overalls, tied up, and then, used as a human paintbrush.

The music is percussion driven and constant. Most of the “instruments” are unique to the BMG show; like an adapted marimba, constructed from PVC-pipes that achieves its peculiar sound by striking the open ends of vertical pipes with flat paddles.

BMG saved the best (and wildest) till the last, launching giant beach balls and paper streamers into the audience, along with video screens simultaneously displaying dozens of inventive alternative terms for the human derriere. It’s difficult to see where high art performance ends and where high-tech vaudeville begins. It’s loud and the strobe lights can be glaring, but I didn’t hear anyone complaining on the way out.


An Interview with Jesse Nolan, musical director with the Blue Man Group

Jesse Nolan is the musical director with The Blue Man Group currently on a North American tour and due in Vancouver March 25 for eight performances at the Queen Elizabeth Theatre. I spoke to Jesse by telephone at his hotel in Sacramento, California where the ‘group’ have been selling out shows at the Sacramento Community Center Theater.

Jesse is excited about bringing the BMG production to Vancouver and believes audiences here should be excited too. “I’m one of four musicians joining the blue men on stage. The show is entirely non-verbal, so we (the musicians) underscore the action” He enthused. “I call it painting with sound” he continued. “The four musicians are visible on stage wearing ultra-violet costumes.”

I asked the percussionist what audiences should expect if seeing the show for the first time. “It’s always an eclectic performance. It has elements of mime, comedy, music and theatre. There’s a clear-cut narrative arc to the show that involves interaction with technology and an explorative concept in high art – a way of looking at things differently.”

When the busy performer gets a brief break from touring next week, he plans to head back to Palatine, Illinois where he shares a home with Amy, his wife of five years. “Even though it’s still winter in Chicago, going back home will be like a vacation. Amy has been a professional performer, so she understands about being on the road.”

When the tour ends in San Juan, Puerto Rico in June, the multifaceted musician doesn’t expect to have much free time. He will head back home to Palatine, Illinois to continue his work as the Director of Education for MashPlantTM (a digital education system that provides a platform for multimedia sharing in the classroom that combines social media with project creation). Jesse regards the founding of MashPlantTM as one of his prime accomplishments. It’s a project he shares with his wife who teaches voice and collaborates on integrating the studio into the curriculum.

Jesse is a consummate musician. I asked if he plays other instruments, “I’ve been playing drums since I was two-years-old. I’ve since picked up the guitar, bass and violin, but I’m far less accomplished” he acknowledged.

Outside of his work with BMG, Jesse has played jazz gigs at Chicago’s Jazz Showcase, Jazz at Lincoln Center (festival) and Sadler’s Wells in London. I asked him if there was a venue he would get a special charge out of playing, “Oh yes, Carnegie Hall.”