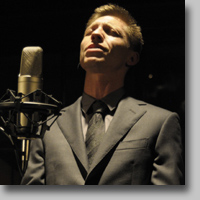 It takes honesty, courage, and a highly intelligent mind to perform this amazing show. Dhaenens presents many famous speeches by famous leaders that have similar words but with hugely different outcomes. His shear skill in electronics produces the sound of large crowds or several individuals talking at the same time and yet it is only Dhaenens who is on the stage. He uses modern technology to the fullest.

His amazing ability to speak t in many languages is an eye opener for starters. There is such power in his speeches such as the attitude towards the Muslims in Europe which is poignant and soul-searching.

He slides in and out of personalities, accents and languages as though he was born on this earth to do just that. Dhaenens has a very rich speaking voice and it overflows into his singing voice.

I see the video reels going on in my head as he takes me back in time to speeches that I have heard over and over through the years and yet this time I hear and see them in a different light (his light). Much of it is a political awakening. We should not live our lives in indifference and passiveness.

It is an incredible performance.  I have to laugh when his speech starts to speed up and his whole body goes into overdrive so that his head is almost a blur. This was amazingly well done. Oh, and by the way did you know that Belgium is the capital of Europe? Too funny!

Bigmouth is one of the most refreshingly original productions that I have seen in a very long time. Our actor, speaker, singer, director is truly a genius.  It is a performance not to be missed.I look forward to seeing future theatre productions by Dhaenens. I am thrilled by his rare talents.