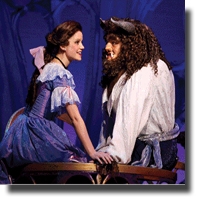 Beauty and the Beast Music by Alan Menken, lyrics by Howard Ashman and Tim Rice

From a child's point of view, this musical on opening night was a success. The pacing was fast and the actors played to the audience exaggerating and overacting most of the time, which they're supposed to do in children's theatre.

The singers sang wonderfully, especially Belle, who was really the star of the show.

I was impressed with the set, the lighting and sound effects. However, I believe for a Disney show like this meant for kids, there should be more matinees as children, by nine o'clock start getting sleepy and want to go home.

My four year old granddaughter was frightened at some moments when the Beast growled especially at the scene when Belle was caught in the room Beast told her not to go to.

The boy who played the teacup was delightful, and the way it was done was very innovative showing only the boy's head with a teacup-like hat and the body hidden inside the serving cart.

Gaston played his villainous role quite well. He fit the macho brainless type of a stud. Another scene which the audience enjoyed was the number Be My Guest, with can-can girls and something that reminded me of the musical hit Cabaret.

Last but not least, the orchestra was fabulous. Without a good orchestra, a musical cannot be successful.

Gabrielle-Suzanne Barbot de Villeneuve’s La Belle et la Bête (Beauty and the Beast) is arguably the most enduring of all popular faerie tales. It provided the basic premise for The Hunchback of Notre Dame and Hollywood’s King Kong. The Disney version, as we might expect, both adds to and subtracts from Barbot de Villeneuve’s original.

The production gets its ‘cute factor’ from eight-year-old Jordan Moore who shares the role of Chip the teacup with seven-year-old Noah Jones. The audience only get to see Jordan’s head covered by a teacup headpiece while his body is hidden inside a teacart. One of the show’s most impressive special effects involves Mrs Potts (Julia Louise Hosack) carrying Chip’s animatronic teacup head across the stage on a tray.

For adults, it’s hard not to enjoy Logan Denninghoff as the comically conceited Gaston, who along with his side-kick Lefou (Andrew Kruep) come up with some hilarious slapstick fun. Denninghoff’s puffed-up, chauvinistic rendition of Me where he exhibits complete oblivion to Belle’s indifference is certainly the funniest tongue-in-cheek novelty song in the show. And when the ensemble come together in celebration of Gaston’s manly prowess with Gaston (there’s no-one like Gaston) adults in the audience cheer louder than the kids.

Emily Behny is a natural as the winsome and independent Belle. Her voice is wholesome and effortless in her principal solo of A Change in Me. Less convincing is Dane Agostinis as the tormented beast who growls and prowls a lot but is not particularly menacing.

Disney’s stage adaptation expands the characters of the Beast’s quirky servants that renders them in a state of mid-transition between human and panoply of inanimate household objects. Among them: Lumiere, a charming candelabra (Michael Haller), Cogsworth the “tightly-wound” clock (James Hay) and Mrs. Potts the affable teapot.

The faerie tale plot may be a little banal for adult theatre-goers, but parents who take along their children will experience the joy and wonder in Disney’s kid-friendly characters.