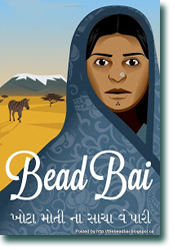 Bead Bai: a novel by Sultan Somjee
Published by CreateSpace

A play, a dance, a painting, a sculpture, a concert, a symphony, a song or a book – I dare say that most of us have been moved by a moment in art, and have viewed life differently after the experience. I recently had such a reaction to a book by a new fictional author, Sultan Somjee.

The book, Bead Bai, presents the life of Sakina, a young woman of Indian origin born and raised in Africa. Her story is not unique, but it is not widely known outside the Ismaili community – a community with religious practices that combine ancient Vedic Hindu and Muslim teachings. From the late 1800s through the first half of the 20th Century, Africa was a prime destination for Khoja Ismailis. They migrated partly because they were no longer willing to hide their beliefs from the violently intolerant views of Hindu and Moslem mainstream societies in India, and partly because of poverty resulting from famine. Many who settled in Africa set up shop as merchants, and soon became suppliers of beads and other wares for the various African tribes with whom they came in contact. The bead business was very profitable for some. For Sakina, it created conditions to be intimately involved with African aesthetic, natural and spiritual insights, gradually blending them with her own cultural practices.

Sakina’s life is bound by the innocently devout religious conviction and habits of her family and community. Her story is played out on the wondrous landscape of the African savannah in Maasai territory, profoundly rich in its own values, traditions and rituals. Sakina has deep spiritual and artistic sensibilities, and it is through these that we share the warm counsel of her grandfather Dadabapa, her bewilderment and conflict in an arranged teen marriage, and her wonder in the musings of a wise Maasai elder Ole Lekakeny. Sakina’s inner journey of discovery is a microcosm of the metamorphosis of generations of Indian migrants into what came to be known as Asian Africans.

Bead Bai is a story not told in the usual formulaic pattern of North American fictional novels, but rather as a series of remembrances that enfold each other, adding depth, texture, nuance and impact as the book progresses. It more resembles the magical, almost hallucinatory stories coming from South America and Africa. It is a story rich in education for the reader, made effortless thanks to Somjee’s masterful writing. Usually when we read novels, our eyes glide over smaller, less significant moments and actions, in search of the main action or plot developments. However, Somjee’s writing is so full that I soaked up every word, learning about history, culture and landscape, relishing every word, because his story is presented so poetically.

Sakina’s innate trust and ability - indeed, hunger - to blend senses, have them merge, flow together, and then appear anew in different forms, manifestations, and ecstasies had me soaring. She's a wonderful narrator with her own authentic voice. All of the incidental characters are finely drawn, with depth of personality that make the story more than a tapestry, because the colours are too rich for that. It is more a luscious marvel of colour and texture that resembles an oil painting with generous brush strokes, and paint layered on layer with knife and any tool at hand that would lend to its depth and emotion and Presence with a capital P. I read the book a second time, just to savour the rich poetic feel.

The ending of the novel prepares us for a new beginning, as this is the first book in a planned trilogy, according to the author. Sultan Somjee is an ethnographer who grew up in Kenya where he saw the sights, worked with the beads, and heard the stories that provide the backdrop for this story. In 2001 the United Nations listed Somjee as one of the twelve ‘Unsung Heroes of Dialogue among Civilizations’. He has published several articles, curated several exhibitions, and written two guide books, Material Culture of Kenya and Stories from Things. He now lives in Burnaby, British Columbia with his wife, Zera and three children. Bead Bai is his first novel.