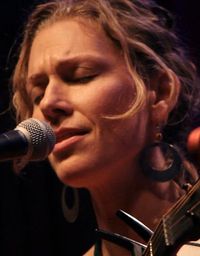 Anna Baignoche’s fourth album, Becoming, is a sophisticated blend of world beats and contemporary sounds. Sung in Spanish, Portuguese and English, her songs are multi-layered and her song-writing skills and ease of musicianship are the product of a lifetime journey that has taken her from her home in the semi-arid interior of British Columbia (Kamloops) to living, studying, writing and performing in Cuba, Mexico, Brazil, and Turkey.

She has been featured by CBC’s Studio 1 Mother Tongue series, has performed at major festivals across Canada, and has a strong and growing regional following in Western Canada. She holds a Master’s degree in Ethnomusicology, and is a fierce advocate of culturally inclusive music education for youth.

Anna Baignoche’s music is a sophisticated blend of contemporary Latin Jazz, country music and world beats. I like Bossa Nova, as well as Latin Jazz, and that's why I enjoyed listening to this album. The influence of Antonio Carlos Jobim is heard in the songs "Meditation" and "Rio". I also enjoyed the blues/rock beat in her sixth song in this album, "I Must Go".

For more info, check out Anna's site at annabaignoche.com.