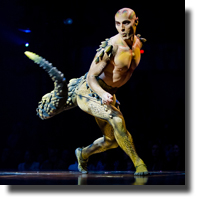 I remember as a child how excited we kids all were when the circus was coming to town. In those days, there were even parades and it was the event of the summer. The tradition continues, and no longer is it Barnum and Bailey or all those other troupes accompanied by horses, elephants and tigers, because now, there are no more animals. They are replaced by humans, queue high tech, and sophisticated machines. But the spectacle is still there. And that's what the circus is about; that's what Cirque du Soleil is about.

Opening night was again a full house, and that circus atmosphere was in the air. Popcorn and champagne were flowing, the usual freebies when this troupe comes to town. The music was live, acoustic, and all female musicians. And like all circuses, the actors, especially the clowns, mingle with and entertain the audience.. The lighting was a spectacle in itself and dazzled the eyes. The show started off with the Japanese unicyclists Satomi and Yuka Sakaino in their golden costumes followed by the Chinese acrobats, the Icarians and Water Meteors. The Chinese acrobats made backflips and their contortioned stretches looked spineless yet graceful. They were swift on their feet and quick in the air as they twisted and turned in sync with the music and lights.

Suren Bozyan and Konchakivska exhibit their Storm, and the performers come back dressed as lizards and peacocks mimicking movements from these creatures. Amy McClendon does her peacock dance but then, something different in the Cirque follows with the Aerial Hoop (Marie-Michelle Faber) and Water Bowl (Julia Mykhailova). What a magnificent act, as these two dance the dance of water and air, two of the basic elements of nature!

The first part ends with the Uneven Bars and I am reminded of the Summer Olympics when we see young girls perform with flawless moves. So also was the case of these professional gymnasts--Karina Brooks, Amara Defilippo, Melisa Fernandez, Summer Hubbard, Renee Koehler, Tain Molendijk, Melanie Sinclair, Brittany Urban, dressed in wild red outfits reminiscent of the aboriginals of South America.

Intermission was a feast, especially at the VIP lounge where I lingered to observe international VIPs drinking their champagne and tasting the canapes and hors d'oevres from what I guessed was French cuisine. The second part of the show was announced, declaring the close for intermission. I took my seat as the lights dimmed. On stage behind an enclosed fence made up of tall branches coloured icy-blue by the lighting was a teeterboard and the jaunty, fit men showed off their prowess as they flipped, somersaulted, hollered, and spotted each other on landing: Kritonas Anastasopoulos, Raphael Herault, Antonio Hernandez, Dario Julian, Moreno Granda, Joe McAdam and Maxime Sabourin.

But what caught the attention of the audience was the breathtaking Manipulation of Lara Jacobs (see sidebar) as she gently picked up what appeared to be golf club-like branches and proceeded to create a tree. My, my, what a balancing act! The audience was definitely mesmerized. The Tight Wire act followed with Veera Kaijanen, Julien Posada and Ernesto Terri doing somersaults-- sometimes successful, and sometimes not being able to stay on the rope. The performance was still victorious as proven by the audience's cheers.

Viktor Kee, the lizard man (see inset), continued the show with his juggling act, with numerous white balls falling from above, and one of them on fire. The Aerial Straps with the women in blue (see the top bar) ended this more than a three ring circus affair, as they flew back and forth above the audience. During the entr'actes, the clowns Nathalie Claude and Josepa (Pepa) Plana Llort entertained the crowd with their clownish antics and interactive comic relief.

Another year, another circus that audiences in Vancouver, young and old, will remember and look forward to when Cirque du Soleil comes again next year..

Kudos to the 16 creators of this show under the guidance of Guy Laliberte!

An Interview with Amy Orfanakos
Tour Publicist with Amaluna

When Cirque du Soleil rolls in into any city with one of its current twenty spectacular productions, the focus is, justifiably on the talented artists, the acrobats, the clowns and the unique characters. But like other large corporations, it also needs the specialized services of many talented people to get the show off the ground.

Young Torontonian Amy Orfanakos, who has only been with the show since August and describes her job as tour publicist, is one such individual. With Cirque’s reputation for producing sumptuous family shows, promoting an extravaganza like Amaluna, might seem like a job that needn’t exist. But with the high cost of bringing the Circus to town, Cirque du Soleil can’t afford to leave anything to chance.

“I work with local contacts like Marnie Wilson here in Vancouver to get the initial word out, then set up time for television crews and the general media to witness rehearsals and conduct interviews” she informed me when I chatted with by telephone on the day that Amaluna opened in Vancouver.

Typically, Cirque shows are outlined with a vague fable that gets lost inside the visually stunning performances. I asked Amy if Amaluna offered anything different to previous shows seen under the Grand Chapiteau like Corteo (in 2008) and Kooza (in 2010). “Amaluna’s story has a more defined storyline with its narrative inspired from Shakespeare’s The Tempest. It’s a coming-of-age story that follows the romance between Romeo, a castaway on the island of Amaluna and Prospera’s daughter Miranda.” She continued “each performance throughout the show illustrates part of the narrative.”

“Amaluna also differs from previous shows in as much as it has a broader female focus. Out of 52 performers, 36 are women, including the entire orchestra” Amy went on to point out.

When Amaluna leaves Vancouver in mid January – next stop Seattle - Amy Orfanakos will leave with it. Wherever Cirque du Soleil takes the show she will remain as dedicated tour publicist.