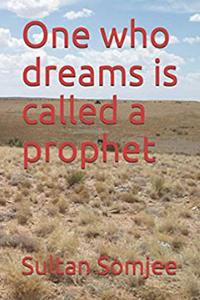 One Who Dreams is Called a Prophet
a novel by Sultan Somjee
Published by Amazon, 2020

Those who have known only peace in their lives often take it for granted. They are unaware of those elements in life that preserve peace or threaten it. They have not experienced the truth of understanding one thing by knowing its opposite. Perhaps this understanding is strongest in those who have known peace, and then lost it. This might be one advantage that elders carry over youth. Experience, memory, tradition, and the capacity to learn from life can carry us to depths of understanding that are at least as valuable as any heights reached by youthful creativity and energy.

We are at a stage in history demanding hard reckoning of the consequences of colonialism. The plundering of cultures and traditions has broken peace in so many ways, from shattering the comfortable predictability of ways of life long held, to the violence grown out of racism and the reactions to it.

And so we meet Alama, a nomad elder in a fictionalized Kenya, witnessing changes in his world as colonial life passes, and independence and indigenous rule take hold. Alama has lived a traditional life, emulating his ancestors in activity and in belief. He is steeped in the ways of living his days, and in the certainty of the spiritual network that underlies and molds the world. He has seen the sad results of a different world view that once invaded his homeland - the disrespect and hurt to the land, the violence between foreign powers played out in his home, far from theirs, the movement of young people from their villages to the cities in their need to survive, and the price they have paid in their loss of cultural and spiritual identity. He sees how diligently the new indigenous rulers have learned all the lessons from the colonizers - politics with its manipulation and duplicity, development with its harm to the land and lack of return for the common people, violent suppression of calls for fairness and honesty, and, of course, greed that fuels all of these things. And Alama despairs.

He wonders if there might be a way to align his world again to the values and secure certainty that his ancestors fostered in laying out the traditions that have shaped who he is. He craves the peace that comes with recognizing the spirit in everything. He yearns for a renewed manifestation of sacredness in the human spirit. He especially mourns the loss of respect for self, family, community, and all of creation, necessary in manifesting the human spirit, and necessary for peace to exist in his world. This peace has been lost. But if lost, it can be found again. And so, true to his nomadic heritage, he sets out on foot to find the source of peace. That quest becomes this remarkable book.

Alama meets several people with apparent insights that could help in his search. This story chronicles those encounters, spoken mostly in his thoughts and impressions. He is befuddled by their words, often frustrated by their lack of clarity, complaining of the “parables and riddles” that they use in their explanations to his questions. He encounters individuals and communities in desperate circumstances that challenge his resolve to continue his search. He finds examples of all that he despairs of, and doubts his own convictions as he stumbles into dangerous situations and heartbreaking scenes. All the while, as he copes, we learn, and appreciate more, the value of Alama’s traditional world view. We glimpse the rewarding potential of learning other ways of seeing and being.

Sultan Somjee is a writer of unique quality. He has been honoured by the United Nations as an Unsung Hero of Dialogue Among Civilizations. His background as an ethnographer gives him ample material for his story lines. What makes him unique, however, is his insightful, poetic voice. His writing reaches deep into recesses in our being human. It awakens forgotten parts of our humanity, long hidden, covered up by lives immersed in acquisition, self-preservation, and egoistic endeavours. It refreshes the tired spirit, and opens doors to new visions of a better way to be. We taste what Alama seeks. This is Somjee’s art…a privilege to experience. Experience this wonderful adventure of discovery, and understand more.