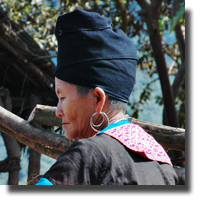 An Interview with Victoria Vorreiter
Author of Majesty in the Mountains: Traditional Culture of the Highland Peoples of Southeast Asia

Majesty in the Mountains, an exhibition of photographs, films, and artifacts, offers an intimate look at the lives and ancestral practices of the traditional peoples that inhabit the mountains running through Myanmar, Laos, Thailand, and China.

Gathered over many years by Chiang Mai-based photographer, filmmaker, and researcher Victoria Vorreiter, it is hoped that these collections demonstrate the timeless beauty, integrity, and wisdom embodied by these age-old cultures.

What is your background such as education and travel?
I am actually a musician. I was trained as a classical violinist and have performed professionally in orchestras in Chicago, London, and Ohio. I was also formerly a music instructor, with a specialty in the Suzuki Method. Music has taken me around the world, giving presentations and workshops. Now I document world music—it is all of a piece.

How did you get into the work you are doing now?
The fundamental premise of the Suzuki Method is that just as children learn to speak their native tongue fluently from birth, so too can they learn to play music by ear, if it is a natural part of their daily environment. The idea that music can be absorbed by example and imitation, and then passed on to others, of course, is the same principle as oral tradition, as practiced by all pre-literate groups around the world. This realization shifted my understanding of education in many ways. It also occurred to me that when I played my violin or went to a concert to hear the music of Bach, Mozart, or Brahms, these works, as celebrated and moving as they are, have little resonance for me personally regarding my life source or the beliefs of my “clan.” These reflections inspired me to travel to remote corners of the world to witness and document the ways in which everything that a people holds true—faith, identity, life lessons, customs, history—are being passed down orally in a living link from mother to daughter, father to son, and shaman to apprentice.

Was there a mentor or event that pulled you toward this cultural photography work in Thailand?
My journey in world music began while I was studying in Marrakesh and traveling around Morocco in the late 1990’s. I became aware of the extraordinary variety of musical sounds and styles that still exist in such a small expanse, due to the fusion of so many distinct ethnic groups. During this time I had the good fortune to visit several times with Paul Bowles, the American composer and author, in his home in Tangiers. Paul was a huge inspiration to me, as he was the first person to travel throughout the country to record Moroccan music, in this case for the Smithsonian Institution. This was enough to compel me to return again, with cameras in hand, to make my first documentary film, “The Music of Morocco and the Cycles of Life.” This experience prompted me to give up the life I had been leading and start a new one on the road.

My photography work started in earnest during my stint in Southeast Asia. This region is one of most culturally rich places on the planet, boasting over 130 different groups and subgroups. Imagine the variety of sights and sounds. So, for the past nine years, I have been documenting the traditions of the mountain peoples in Laos, Thailand, Myanmar, and China through various media: films, photos, recordings, journals, and collections of textiles. This has resulted in a large, integrative body of archival work, the Songs of Memory project, which is just now coming out in a book, CD, documentaries, and museum and photo exhibits.

Without a doubt, my role model in this endeavor has been Edward Curtis, who gloriously photographed the Native American peoples at the turn of the 20th century, before their ancestral traditions completely vanished. I have tried to follow in the footsteps of both of these great ethnographers.

Why is it important for people to learn about the Northern Hill Tribes you document?
Honestly, I think it is important for the international community to learn about indigenous cultures everywhere. As these people still live close to the earth and continue to carry out practices that are “tried and true,” as established by generations of ancestors, there is much to learn about living harmoniously with community, with nature, and with the spirit world. As our modern lifestyle now prompts families to separate, countries to engage in war, and companies to abuse our natural resources, I believe traditional peoples can offer their wisdom in the resilient ways they have sustained themselves throughout the ages.

What are common misconceptions that people have about the Northern Hill Tribes?
Thailand includes an amalgamation of distinct peoples who have migrated, traded, and traversed the land throughout the centuries. Those who eventually settled in the mountains of the north often live in villages that may be difficult to reach, especially during the rainy season, and that are far from urban centers. That many of these communities do not have a literary heritage adds to the misconception that they are uneducated or simple. This could not be further from the truth. The knowledge and skills that they display simply take other forms, which in many ways surpass our own.

When I launched my Songs of Memory multi-media museum exhibition, highlighting the region’s six major ethnic groups (Hmong, Mien, Akha, Lahu, Lisu, and Karen), at the Jim Thompson Museum in Bangkok in 2009, I thought perhaps visitors would shun the event. In fact, visitors came in droves, as if they were thirsting for this kind of experience. They seemed amazed at the sophistication, artistry, and integrity that the traditional peoples display.

What is an uplifting story you can share about the people you document?
It is my style of fieldwork to visit and stay in the same mountain villages many times, year after year. I travel alone with my guide, doing my own filming and photography. Each time I return, I come bearing offerings for their rituals and the photographs and films I have made. These practices, along with the fact that I am a woman, I believe, have allowed me to know the men, women, and children in the village more intimately and to witness and document numerous ceremonies that are rarely seen.

Yet while I ask many questions and learn many things about the people I visit, never do they reciprocate and inquire about my life. So, during my third year filming the annual Fertility Festival in an Eng village in Keng Tung, Myanmar, when an Eng woman, with hand over heart, told me that she misses me when I am not there, I was moved beyond words. Truly, I just melted.

What are some major challenges these tribes face and is the traditional way of life for these people being threatened and how?
There are looming human rights issues for many people, who have fled from a repressive regime into another country and who are stuck in limbo in refugee camps, without national identity papers, homes, work opportunities, education, or adequate health care. For those who are settled, some governments are taking land away from certain indigenous groups, who have lived and worked the terrain for centuries.
Other examples of change and challenge occur now that even the most remote places are connecting with the world at large. Many villages have electricity and with that come the benefits and ills that technology offers. With it, too, comes an awareness of disparity between those who have and those who have not. Consequently, there is a rapid shift from tribal values to monetary ones.

On a cultural note, young people in many areas are required to attend national schools or are flocking to urban centers for work. No longer are they learning the traditional ways of their forebears. Thus, the ancestral knowledge that has supported their very identity is quickly, quietly disappearing. It is said that if one generation fails to transmit its knowledge to the next, millennia of accumulated wisdom can be lost in a few decades. These losses diminish the diversity and distinctive beauty of our human race.

Where can people learn more about your work and upcoming shows in Asia or North America?
Enormous thanks for giving me this opportunity to share the Songs of Memory project and the Majesty in the Mountains photo collections with your readers. To learn more about this archival work, please see the various media (slide shows, sound clips, films, and photos) at www.TribalMusicAsia.com.