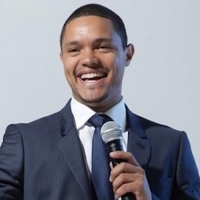 Trevor Noah comes onto the stage as the crowd cheers and claps. The audience appreciates his taking a break from his regular job of hosting the Daily Show. He is casual and hilarious.

Canada, he implies is too good and a terrible contrast to the USA. He starts out with a Trump impersonation about refusing to take in immigrants and contrasts Trump to young Trudeau welcoming them with “Oh yes, you immigrants are welcome here.” Mimicking the two politicians' accents brilliantly, Noah has a talent for accents and languages. He says he speaks 7 languages including English twice over as South African English and American English can be very different in the meaning of some words.

He speaks of food and how “immigrant spice” makes the world interesting. Christopher Columbus risked travelling to the edge of the earth just to find spice! He speaks of his love of Indian food and the confusion it caused in Scotland. Standing on the stage for an hour, he keeps the audience mesmerized and laughing.

Having grown up in Apartheid South Africa as a mixed-race child, he has a genuine experience of racism and non-acceptance. Noah explains the difference between people who are so fearful of being racist and others who are. He jokes about people being colour-blind. That's a myth, he suggests. Noah spends some time discussing his encounters with the N-word and how he deals with it head-on. There is no covering up or sugar- coating with the insult. 'Just return it to them with a smile.' he says. Words he explains hurt only if you give meaning to them. Words that hurt in America have no pain in South Africa!

He keeps the audience passionately engaged in the vagaries of people's perceptions and the shallowness of fear-mongering. The audience laps up his every word with peels of laughter and gut-rending tears of amusement. Noah has a natural charm and a gift that keeps his audience enthralled. He brings up common fears and discusses them with common sense and humour. This is refreshing specially these days with the politics of fear, of terrorists and bombs in so much circulation. As he says “America is a nation of immigrants!” His one-man comedy show helped to bring the truth to the forefront and helped abate some of the worry of the common man. An hour flew in a jiffy and when Noah stopped talking everyone seemed surprised and yearning for more. We left with a smile on our faces and much food for thought.