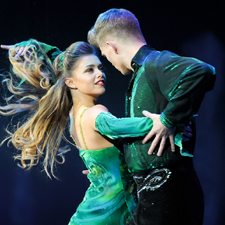 The Riverdance Irish dance troupe, musicians, singers, and featured International soloists really need no review as they celebrate 20 years of world-class entertainment. Navigating through a packed lobby filled with young and old dancers and enthusiasts before the show, one young girl and her mother caught my eye. Both wore a sweatshirt identifying them as dancers and both were so excited to see the show. At intermission, they caught my eye again as the young girl went dancing up the aisle, compelled by the inspiring talent on stage.

This show really is a sight to see. The theatre is filled with great sounds of percussion and celtic instruments, with smoke and flashing lights that introduce the skilled dancers. Dancers whose legs appear to move independent from their bodies. Many Celtic themes are included: a folk singer holds a candle backlit by a magestic moonscape projected behind her. It's difficult not to be overcome with the steady rhythmic tapping of the dancers. The troupe itself was perfectly synchronised, and just as they were getting going the Alpha Male dancer enters and brings the entire performance up a notch.

The second half was much more rousing and took a few more risks. One piece, called "Trading Taps" featured a straight up dance-off reminiscent of West Side Story, fought between three traditional Irish dancers and a more urban/modern duo of dancers. Another highlight in the second act was a piece entitled "Macedonian Morning/The Russion Dervish", which featured The Russian Folk Dance Troupe and was amazing to watch. Punctuated by spinning dancers and leaps and splits high into the air had the audience in awe.

The MVP of this show was Musical Director Mark Alfred on drums, percussion, and Bodhrán, which is a type of Irish frame drum. Alfred's larger-than-life percussive performance is what sets Riverdance apart from your average dance show, and brings it to a new level: Rock Ballet.

If you are not a fan of Celtic dance, you may find Riverdance a bit cheesy at times, with its new age stage set-up and echoey, mythical poetry and smoke machine that may remind you of Spinal Tap's Stonehenge (at least, it reminded me of Spinal Tap's Stonehenge). But the talent on stage is undeniable, and this show is worth it if just to see the young talent being inspired by such an amazing performance.