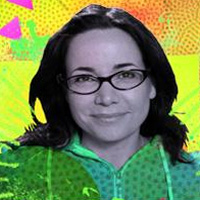 Being a massive Janeane Garofalo fan, my expectations were almost unrealistically high when I walked into the famous Rio Theatre. Buzzing with excitement and unreasonable expectations, I settled into my seat and waited to experience Garofalo’s stand-up comedy for the first time.

The 2-hour show felt like hanging out with your hilarious best friend, where you rag on annoying societal norms, make fun of people younger than you, and even talk about television shows. Garofalo’s wit seems effortless and unscripted - “we’ll come back to that later” was a common refrain. And she often would come back to it, even if the reminder came shouted out by an audience member later on.

Not only is her style completely approachable yet effortlessly cool (including signature geek-chic glasses), but her show really did seem completely unscripted. Garofalo herself admitted that every show is different, after observing that a large portion of the show was spent discussing current television shows. But this audience engagement is part of the reason Garofalo comes off as so completely relatable and approachable.

Best of all, Janeane (because I really want to feel like we’re on a first-name basis) is not crass. She does not rely on harsh language or shock value, and her jokes are well considered and current (who is Scrillex? I don’t know, but Janeane apparently does). Does she babble a little bit sometimes? Sure. But who among us doesn’t occasionally babble? To me this is just another one of Janeane’s endearing qualities. This is a highly recommended live comedy show.