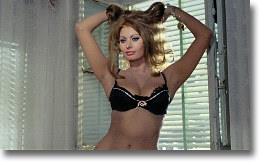 In Italian with English subtitles

I’m no stranger to Italian films, but somehow I have never seen the beautiful Sophia Loren in her younger days in action. This film was an absolute treat to behold – Loren’s mystique and beauty is absolutely commanding, and definitely holds her own in the company of the incredibly talented Marcello Mastroianni, of Fellini film fame. Being a Vittorio De Sica fan already (the black and white classic Ladri di Biciclette, released 15 years before this one, is one of my favourite films of all time), I anticipated that I would enjoy Yesterday, Today & Tomorrow. Whimsical, hilarious, and wonderfully acted, it shows an impressive range for Director De Sica as well as actors Loren and Mastroianni in three separate stories / acts about couples in different parts of Italy.

The two leads’ chemistry is unmistakable, but Loren’s boundless vitality definitely holds the reigns. Mastroianni’s tired loyal husband, smoldering charm, and neurotic lover (each of his characters) is a perfect romantic pairing to Loren’s passion and gusto. They went on to star in another 12 films together, connecting effortlessly not only with each other, but with the audience as well.

Winning the Academy Award for Best Foreign Film in 1965, this quirky masterpiece definitely deserves a revisit. With only one screening during the film fest, I am sure you will be able to find this or any other De Sica works of art at your local independent movie rental shop (think Black Dog Video on Commercial Drive, so that you can grab an espresso and a cannoli in the neighbourhood at the same time). 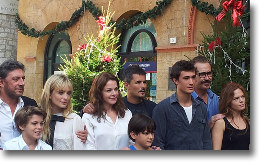 In Italian with English subtitles

I honestly thought this was a strange movie. A really, very strange movie. The premise itself is quite strange: Leone (played by Sergio Castellitto) is a wealthy man, who has hired actors to portray his idea of “a perfect family” on Christmas, acting out a script he himself has written. The actors must stay in character when in the presence of their severe taskmaster, but his mood swings and demanding improvisations create drama, tension, and even romance when the actors slip into themselves again behind the scenes.

The more I think about this movie, the more I appreciate its unpredictability and uniqueness. Though it’s a strange, strange movie, there is poignancy to many of the scenes. There is a sense of fragility and tension in the relationships between these family members who are veritable strangers to the lonely Leone that is almost quite reminiscent of real family relationships. The irony is obvious; the search for a perfect family exposes the reality that real families are very imperfect indeed.

While this film is good for an awkward laugh in the cinema, this film has gentle subtleties that reveal themselves as after thoughts, hours after the details have sunk in.