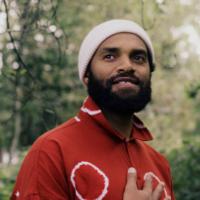 The Cultch
The Essentials (Soft Cedar)

Detroit native, now an adopted Canadian and a member of the gospel trio Sojourners, Khari Wendell McClelland asks his audiences to think about what is essential. He is joined on the York Theatre stage, in-person by international musicians and virtually by some eclectic spoken word performers. McClelland welcomes the “at-home” audience waxing philosophical about the societal, environmental, and public health challenges we all face during this unique period.

The first performer is Chief Henry Seaweed demonstrating a traditional indigenous dance in bare feet. This is followed by a video of sound immersion artist Faye Mallett performing with a set of singing bowls that appears to be on a sunny day in Lynn Canyon.

It’s then back to the York Theatre with the show’s host and curator Khari Wendell McClelland and Jeanette Reed in a vocal performance of “Hey Papa” – one of his own compositions. McClelland possess a pleasant soulful voice that has its origins in Roots and Gospel music.

It’s the musical performances that offer the most in entertainment in this presentation; a mix of live steaming and recorded acts. Local jazz musician Gordon Grdina performs a couple of interesting tunes on the 11-string oud (it resembles a bouzouki with a shorter neck). Grdina never looks up from his instrument, nor does he speak to the audience, even to reveal the titles of his music – although, there is a sense that it is partially improvised.

For me, the most satisfying part of the show was Toronto R&B singer Tanika Charles’ live streamed performance from the York stage. Ms. Charles didn’t leave much behind on the stage with her rendition of “Darkest and the Dawn.” A change of tempo followed with a slower ballad “Dan les Nuages.” Sadly, I temporarily lost the live feed half way through the song – an unfortunate by-product of virtual attendance.

Interspersed through musical performances there was an eclectic selection of poetry and social commentary from whom McClelland refers to as “poets and thinkers.” Some, in the case of Ashon Crawley, were thankfully brief, while Hari Alluri’s personal story of everyday life was interminably long. Mia Birdsong, a social activist advocating for the low income groups, offers a largely esoteric monologue about Love.

It’s unlikely that audience members investing in the entire ninety minute of the show wouldn’t find something to their liking, but it’s just as unlikely that they find a degree of satisfaction in all of it.