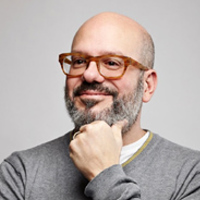 The darkly funny David Cross begins his 2016 stand-up comedy tour with one of the biggest, greyest beards I’ve ever seen. Donning a plaid shirt and jeans, Cross instantly charmed the Vancouver audience at the intimate yet crammed Vogue theatre with lots of Canadian and specifically Vancouver references. In fact, the first portion of his performance was based on his experience and history with the city of Vancouver, hilarious observations, and even some miming of awkward scenarios at Stanley Park. It’s doubtful that Cross comes up with unique bits of material for each city, but either way it went far in generating extra love from the crowd.

Going right into his signature style of wince-inducing dark subject matter – from Hiroshima to children in heaven to mass shootings – Cross got a decent amount of positive response from Vancouver. I felt a lot of his political commentary was on point, though he often took several minutes to set up his punchline, during which the audience waited quietly and patiently to laugh accordingly.

Cross relies heavily on a healthy sense of irony for his stand-up, much of which uses a silly-voice delivery for often very distasteful jokes, which I personally find very appealing and hilarious. However, I recognize that stylistically this may not work for everyone. Cross will never have as much appeal as, say, the highly accessible and hilariously family-friendly Jerry Seinfeld, nor will his jokes ever come fast and furious like Louis CK. And Cross’s style is just a little too condescending to lend itself well to physical comedy like Jim Carrey or Robin Williams. But when his jokes land – they land strong. At worst, this performance was consistently amusing… my sides weren’t hurting at the end of the show, but I’d had a really good time.

I’m familiar with a lot of David Cross’s previous stand-up performances – Shut Up You F-ing Baby is one of my favourite comedy shows of all time – and I know that not everything hits its mark, but when it does it’s truly brilliant. I have a few favourite David Cross bits, and I definitely accumulated one or two more from this tour.