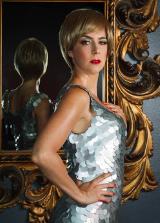 When & Where November 23, 2021, at 7pm | The Norman & Annette Rothstein Theatre, also Live Stream on Demand

It has been exactly a year since we saw Iris Bahr’s comedy show for the 2020 Chutzpah! Festival streamed from Los Angeles, California. Entirely unscripted, it was one of shows that actually worked well virtually. Iris Bahr returns to this year’s Chutzpah! with a rather different format. Gone are the oddball characters drawn from her solo 11-character show DAI (Enough). Instead, Bahr commits to a story-telling stand-up routine.

Bahr is an incredibly versatile comedian. I remember seeing her as a younger Orthodox Jewish woman Rachel Heinemann on the Larry David show Curb Your Enthusiasm. She is obviously also highly intelligent. After moving from The Bronx, New York to Israel with her mother as a teenager she attended Tel Aviv University and served in the Israeli Military Intelligence, eventually attaining the rank of sergeant.

Bahr kicks off her (surprisingly short) forty-five minute show as her alto ego, professional baby surrogate Rae Lynn complete with blonde mullet, strolling round off-stage chatting to members while staying in character. After disappearing briefly behind the stage curtain, she reappears in black jeans and black sweater – minus the mullet wig.

For the next half hour, she embarks on what seems to be a personal family crisis concerning her 82-year-old mother suffering an aneurysm during a Face Time call between the two. What turns out to be an emergency visit to Israel ends up being a several month stay while her mother goes through surgery, then rehabilitation. I noticed that the mostly female audience appeared to enjoy the humour, but also joined in the comedian’s frustration. Perhaps they identified their own experience in her story.

I would have likely found Bahr’s allegory depressing, had been related by anyone else.