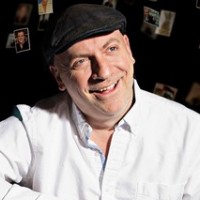 How does a middle-age Jewish Cockney performing a song cycle entertain an urbane Vancouver audience for an hour and a half without moving from behind a Yamaha keyboard? Well, Daniel Cainer somehow managed to pull it off. Born in Shepherds Bush, London and raised in Surbiton in the Borough of Kingston upon Thames the congenial entertainer recounts though simple melodies his extensive heritage.

Dressed in black and wearing a flat cap that never gets removed, Cainer runs through about a half dozen songs central to his progenitors or just real life experiences. Half dozen songs in an hour and a half seems a stretch, but Cainer’s songs are ten-minute epic poems set to music.

It turns out that among Cainer’s illustrious ancestors is Sir Montague Burton, a bespoke tailor who emigrated from Lithuania to Britain and founded Burton Menswear, one of Britain's largest clothing chains. However, Cainer’s (lengthy) song offers a rather different perspective of the entrepreneur and a business partnership he shared with his brother Maury.

The songwriter blends Jewish story-telling with good old British satire, but one doesn’t have be either Jewish or British to enjoy his show (though, it would certainly help). One of his songs, which I took to be entitled “Bad Rabbi,” lampoons a churchman with a propensity to snort the odd line of cocaine, as well as associating with “ladies of the night.”

Another song rambled on about a distant cousin called Naomi; a lonely spinster who had a vision of Jesus and wound up joining a Christian cult. The last song, “Surbiton Washarama” delivers an element of poignancy, with the audience encouraged to join in on selected lines. It centred on a close family member pursuing “good clean fun” with a girl in a Laundromat - oy veh!

In 2014 Daniel Cainer claims to have performed at an arts festival in Recklinghausen, Germany, where there are apparently NO Jews. He next takes his show to New York City, then he’s back home for shows in London, then back to the U.S. for a show in Chicago.