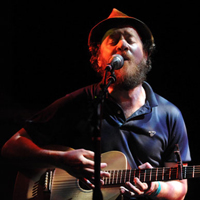 The Cave Singers are indie rock troubadours. The sizeable crowd at the Commodore Ballroom on Thursday night were enthusiastically supportive and they all seemed to enjoy the concert immensely. There is something restlessly frenetic and relentlessly rocky about this band’s music. It dances on the edge of acoustic ardour and lifts its audience beyond the blanket of quiet electric comfort into a quilted aura of arduous percussive intensity.

Lead singer Pete Quirk has his own unique style, inimitable and intense. It is in some ways reminiscent of a blend between Dylan and the distinctive vocals of early Murray McLaughlin.

Bassist Morgan Henderson pounds out the bass-lines with stinging success. He also does double duty on the flute, adding lustrous licks as the group’s flautist.

Rounding out the group, lending greater complexity and depth to its rich rocky tones, are drummer Marty Lund and guitarist Derek Fudesco.

This band has a vigorous verve and a rough-cut authenticity that distinguishes it from other run-of-the-mill indie groups, particularly the banally-bad-throwback-to-a-grunge-style group Bleeding Rainbow, who opened rather painfully for them on Thursday night.

The Cave Singers concert at the Commodore was memorable for rhythmic rigour and savvy musicality.