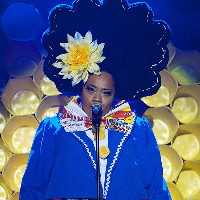 Hot Brown Honey is a blast of fierce fun from, well, even before the show starts until after it ends. It’s hip-hop burlesque that’s delivered at full force and maximum volume. The show is a nonstop carnival ride with over-the-top entertainment that includes slam poetry, acrobatics, beat-boxing, dance and anything else the performers can think of.

The six female performers are from Australia, but it’s hardly likely that they follow cricket. All the women have acquired outrageous hip-hop monikers: Game Changer, Myth Slayer, Queen Bee etc. (okay, hardly original, but it all fits a collective persona).

The show doesn’t support a linear narrative; although, it does impose a central theme of female empowerment (what else). The show isn’t afraid to get political – even politically incorrect. Decolonization and stolen land are issues that Australia has in common with Canada. However, Hot Brown Honey’s method of bringing these issues to the fore is infinitely more engaging.

To attempt to describe each of the acts would likely not do justice to the show as a whole. Except that one sequence that stands out, because it differs from the rest of the show is Crystal Stacey’s (aka The Peace Maker) hula hoop dancing in a bikini with the Blue Ensign design.

The show works well when the audience commits to the performers arrogation to “make some noise.” The show’s non-stop, in-your-face performance continues at the York Theatre until January 27. If you enjoy shows that are sassy, sexy and have a social conscious this is definitely for you. If your preference is for something more sedate – then maybe not.

I didn’t use the ear plugs handed out by volunteers in the lobby. As a reviewer, I wanted to experience the show’s full force. At the end of the roughly eighty-minute performance, I felt more relief than grief – I guess you CAN have too much fun.