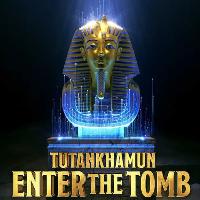 Tutankhamun was an ancient Egyptian Pharaoh, the last of his royal family to rule during the end of the eighteenth dynasty. Tutankhamun is thought to mean; “Living image of Aten.” He took the throne at age nine, but died at nineteen. He married his half-sister Ankhesenamun, but left no descendents.

Beyond King Tut provides visitors with an immersive virtual promenade within the ancient wonders of Egypt. The display is in four parts: The first is a gallery that consists of black and white photographs of the archaeological site and information boards that provide detailed descriptions. The second phase of the exhibition is a room displaying high-resolution images of the Temple at Karnak and the Great Sphinx.

We then enter into King Tut’s burial chamber where we see many of the artifacts discovered in his tomb that the Pharaoh would need in his afterlife. After proceeding down a narrow hallway, we observe the boy king’s journey to the afterlife, as researched from the Egyptian Book of the Dead that chronicles the 70 days between death and burial. We then enter into the main hall where we may want to follow a looped (roughly twenty-minute) animated video that depicts Tut’s adventures in the afterlife. In the centre of the hall, visitors will find a model long boat where they can sit and observe the presentation as it unfolds around all four walls.

While this exhibition is both entertaining and educational, and suitable for any member of the family, visitors should be aware that there are no actual artifacts on display. All the artifacts recovered from the tomb are now housed at Museum of Egyptian Antiquities in Cairo. So, Beyond King Tut is an entirely virtual-reality exhibition. Be prepared to spend at least one hour touring the display to get maximum benefit.