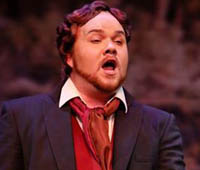 Violetta is the quintessential 19th century romantic heroine - the beautiful, popular party girl with a rich boyfriend, who suffers from an incurable disease. The younger Dumas invented her in his novel and play, La Dame aux Camellias, glamorising the life of his own mistress. Verdi took the story, set in his own time, and made it timeless.

The story is straightforward: boy admires girl from afar, boy convinces girl of true love, boy and girl live together in idyllic dream until disturbed by stern father and the cruelties of real life. Verdis music so perfectly captures the feelings of his characters and so feelingly describes the complexity of their changing emotions that he has made one of the greatest of all grand operas, intimate and humane.

Ihere are considerable challenges in the music which was written for the best singers of the day. Verdi was very particular about the quality of the performers hired. The young cast at UBC Opera tackled this courageously and with considerable success. UBC Opera double casts, and the night I saw it, the three major characters, were played by Laura Widgett (Violetta), Owen McCausland (Alfredo) and Kyle Lehmann (Germont). Amongst the smaller parts, Elena Razlog was bright and pleasing in the thankless role of Flora, Violettas friend, Violettas maid Annina, faithful and in this production unconditionally kind, was played by Gwendolyn Yearwood. She sang her few lines completely competently but shone dramatically. Duncan Watts-Grant too, used his warm and sympathetic bass to make the most of Dr. Grenvil, another small part requiring strong vocal chops.

Owen McCauslands tenor has real depth and richness so that in Act I his wooing of Violetta, Ah, sì; da un anno was completely direct and genuine and in Act IIs Lunge da lei per me non v'ha diletto!' he seemed steeped in happiness.

Act II is driven by Germont. He enters as the stern father, concerned only with reputation, and leaves full of affection and admiration for Violetta. Lehmann displayed a strong baritone and managed to create a convincing impression of a man of middle age. Hebrought a fitting restraint to the part, growing stronger as the character became more sympathetic and there was real rapport between Germont and Violetta. He was surprisingly strong in Act III when he reprimands Alfredo for his behaviour towards Violetta.

Laura Widgetts Violetta is enchanting. She soared through the brindisi, the drinking song, Libiamo ne'lieti calici with gaiety and ease. In almost the next breath, with Sempre libera in which Violetta reflects on Alfredos declaration of love and wonders if perhaps he is the one, she showed real depth and nuance and feeling. With vocal agility, considerable stamina and warmth of character, Laura Widgett stole more hearts than just those on stage.

The Opera Ensemble sang with lightness of spirit and joie de vivre. The three gypsies are to be commended for their dancing skill. Stanislov Galimkhanovs dance during the Matador chorus Di Madride noi siamo mattadori' was an unusual and effective device, well choreographed (by the dancer) and well-danced. Sets by Alessia Carpoca and the costumes were very pretty and apropos. The lighting (by Jeremy Baxter) however could have shown the passage of time more effectively. Nancy Hermistons direction was as always eminently competent. Gordon Gerrard took over the conductors job for the final performances and led the Orchestra and cast with verve and sensitivity.

Next years season has been announced and it is daring. Massenets popular Manon is lush and romantic but offers musical challenges for young singers. Eine Nacht in Venedig (Night in Venice) is by Johann Strauss II and is guaranteed to please, but as a pot-boiler it is a little known one. Finally, an undeservedly unpopular composer in Vancouver, Benjamin Britten. At midsummer next year, we will be watching his Midsummer Nights Dream, a fantastic, fantastical and bewitching opera. Vancouer Opera should be so brave.