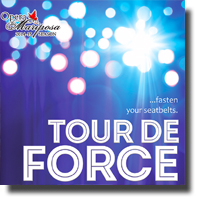 The show began with “Getting Married Today” from Sondheim’s Company, a selection that introduced all three performers to the audience. Excerpts from such musical fare as a delightfully over-the-top performance of ”Glitter and be Gay” by Robin Eder-Warren and a scornful rendition of “The Ladies who Lunch” by Jacqueline Ko followed.

A surprising exception to musical theatre showstoppers was “The Girl in 14G” written by Jeanine Tesori for Kristin Chenoweth about a girl who can’t beat ‘em, so she joins ‘em – in singing.

The singers didn’t just sing these phenomenal songs – they performed them. With help from some imaginative costumes, the trio of artists brought memorable moments right off the Broadway stage.

Jacqueline Ko handled the more melodramatic tunes with attitude. Taking on the character of Elphaba (without the green skin), her interpretation of “No good deed goes unpunished” surely defined the distinction between good and evil. Ms Ko showed her lighter side joining Kyle Preston Oliver in a tongue-in-cheek performance of the darkly comical “A Little Priest” from Sweeny Todd.

Many of these tunes have complex structures, so Chris Feige deserves kudos for providing single-handed accompaniment on piano.

The show ended with Ko, Eder-Warren and Oliver delivering a cheerful rendition of “The song that goes like this” from Spamalot and an inspirational encore performance from Jacqueline Ko of Stephen Sondheim’s survivalist song “I'm Still Here” from the musical Follies.