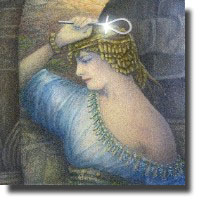 Pacific Opera Victoria’s 2008-09 opened with a sumptuous mounting of Massenet’s 1894 opera Thaïs. Based on Anatole France’s novel set in the 4th century Alexandria and the nearby desert of Thebaid, the opera offers a fascinating view into the sensibilities and concerns of another era.

This opera slips in and out of the repertoire – it’s lately had a flutter thanks to Renee Fleming and Elizabeth Futral – and it’s not hard to see why its hold is precarious one: some of the music is merely craftsmanlike, the libretto is a bit of a hash, and the central intrigue -- the discovery of spirituality -- seems, at first sight, very old hat indeed.

But there are rewards, several in fact, for the patient and attentive. And the directorial team, abetted by gorgeous sets and costumes from L’Opéra de Montréal, knew unerringly how to reveal them. The POV cast is a very fine one, and the musical and dramatic values of this production are thoroughly first-rate, not a surprise for anyone who has been lucky enough to watch this company for the past few seasons and more.

The set—a giant eye—whose perspective was ever-changing was another star performer, helping to draw out the symbolic contrasts between the courtesan Thais, obsessed with her passing beauty (sensuality/materialism) and the monk Athananaël (spirituality/asceticism), drunk on his austere and dry-as-desert god. The music underlines these contrasts with its spare line for the ecclesiastical choruses and its lush sensuality, flecked with Orientalist touches for the urban scenes.

Monica Whicher offered an elegantly crafted performance as Thaïs the woman in search of her true soul, her French diction near flawless, and her acting skills honed to perfection. Her famous “Mirror Aria” was brilliantly understated, flowing seamlessly into the Impressionist palette rather than being a stand-alone wonder, and her death scene was simply thrilling as, entering paradise, she beholds her new god.

She was ably abetted by Aaron St Clair Nicholson as the hair-shirted monk, his tasteful singing an object lesson in refinement and ever at the service of the score’s dramatic values. Lithe, agile, and drop-dead handsome, he dominated the stage in this singularly impassioned opera, bringing out the fiery side of his love, first for his god, and then, discovering his own humanity, for Thaïs, all too late as the priestess of Venus has, like him, renounced the world and then life itself

Luc Robert, a fine Rigoletto for the POV a few seasons back, was in excellent voice as the wordly and philosophical Nicias, delivering a thoroughly idiomatic performance shot through with fine musicianship. One wished only that his role was larger.

And the same can be said for the deft Palémon the old monk of Chad Louwerse, a versatile singer whose stage presence is always spot-on. The smaller roles of Crobyle and Myrtale were impressively taken by Julie Daoust and Mirielle Lebel, yet more fine singers from Quebec, which seems to have no end of them these days.

In the pit the ever reliable Maestro Timothy Vernon caressed out shimmering sounds from the Victoria Symphony, the palette of colours and the Wagnerian touches both given full value. The famous Meditation was breathtakingly rendered.

Fusty the plot may be, but in these capable hands this opera came vividly alive. A company known for challenging its audiences, Pacific Opera Victoria, again issued an invitation “to come and see” something different, something reconsidered, something “old” in a new guise, and how fortunate Victoria is to have a company so committed to excellence as is this one.