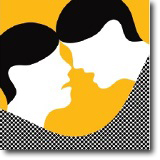 It’s not too often in opera productions that the composer and librettist join the performers on stage for the final bows. But that’s exactly what happened when the stellar cast collectively lined the Vancouver Playhouse stage at the end of Vancouver Opera’s new work Stickboy. Composer Neil Weisensel and former slam poet turned librettist Shane Koyczan were on hand on this rainy Saturday night to share in the audience’s exuberant applause.

Certainly, the pair had every right to be there. Stickboy is essentially Koyczan’s autobiographical novel of a young boy having to endure relentless physical bullying from fellow students without any substantial support from teachers. Winnipeg-based composer Neil Weisensel has created a brilliant musical score that so closely harmonizes with the performance that it might, at times, be overlooked.

The dramatic component is certainly denser than the musical component, but Stickboy as a serious operatic work, not only deserves to succeed, it’s actually important that it does so. It assuredly has a lot going for it. Giant Ant’s superb abstract animation across three video screens runs through the entire production. And while much of the story is clearly offered through the libretto, Koyczan provides supplementary narration in voice-over.

In the first scene, the protagonist referred to only as “the boy” is rescued from the worst side of a street scuffle by a well-intentioned old man, who then escorts him to his guardian’s home. Chronically overweight, the boy presents an obvious easy target to his persecutors, yet, even at ten years old he has learned not to expect sympathy from anyone and has trained himself to suffer in secrecy. At this point, I found it just a little bizarre that the main characters have anonymous references (boy, grandmother), while minor role perpetrators are ascribed with first names.

Weisensel ‘s progressive score with its circular structures, doesn’t leave much for spellbinding arias. The closest we get are in the final act with Sunny Shams' naively optimistic “I’m getting the hang of this new school” and “Love is stronger,” an emotionally quixotic duet between Shams and Megan Latham, who is glorious as the boy’s grandmother. Mr. Shams and Ms. Latham together carry the burden of both the visual and vocal impact of the show, and manage it without dropping a note.

Director Rachel Peake never allows the cutting edge multimedia or the ingenious set with rotating inner stage overwhelm the production’s message. Stickboy aims to provoke thought, and to that aim it most definitely succeeds. Thankfully, it doesn’t sermonize nor does it attempt to rationalize.