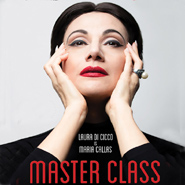 In the late summer of 1977, I remember watching television which was abruptly interrupted with an announcement of the untimely death of Maria Callas. Three days earlier, I had heard of the passing of another music giant, Leopold Stokowski, and a few weeks later, we then lost popular music icon Bing Crosby. Nearly forty years later, it’s only the much celebrated diva, Maria Callas’s legend that looms large.

Master Class is Terrence McNally’s fiction-based-on-fact play that focuses on Maria Callas’s short time as a vocal teacher at Juilliard after her career in opera was over. Callas certainly had a reputation of being the clichéd diva with directors and fellow artists. However, it’s unlikely that she carried this tenet into her classrooms, but the playwright doesn’t allow fact to get in the way of indulgent characterisation.

Laura Di Cicco delivers a tour de force performance as La Divina without singing a note. Ms. Di Cicco takes down the fourth wall in speaking directly to the audience as if we were students in her “master class” - the closest I will ever get to attending a class at Juilliard. From the moment she walks from the vestibule, down the aisle and onto the chancel (the stage), she takes command, and aside from a slight stumble at the beginning of the second act, she never lets go. She masterfully assumes the huge personality that the subject likely didn’t possess as well as the fragile ego she most certainly did.

Despite being centred on an opera star, Master Class is not actually musical theatre. Notwithstanding, One should certainly delight in the performances of two sopranos, Christina Dennehy and Jacqueline Ko and a tenor Jeff Fang and their respective renditions from Bellini’s La Sonnambula, Puccini’s Tosca and Verdi’s Macbeth. It’s these exquisite arias that transport the former diva into a trance-like reliving of past triumphs where she becomes trapped between nostalgia and reality.

While McNally leads us to believe that the central character is so encumbered with vanity as to be unable to coach future artists. His play, through the performance of Laura Di Cicco allows us to see the sacrifice and commitment required even from someone with the talent and star power as Maria Callas. What Master Class lacks in truth, it partly makes up for with a sense of aesthetic.