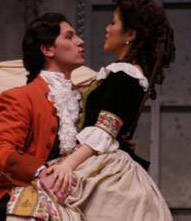 UBCOperas current production of The Marriage of Figaro is straightforward and eminently pleasing. Neither HIP (as in historically informed performance) nor a hip, ultra-modern manifestation, under Nancy Hermistons direction the cast presents a thoroughly traditional performance displaying care and respect for Mozarts lovely music.

A wonderful set, filling the Chan stage with Baroque splendour, accompanied by a fizzy overture played with zest by the UBC Symphony Orchestra under Neil Varon, paved the way for Scott Brooks (Figaro) and Stephanie Nakagawas (Susanna) lively opening scene. Brooks confident bass and Nakagawas feisty soprano were a good match for each other throughout.

Costuming was unfortunately not as splendid as the scenery, and in some cases problematic. Antonio (Matthew McLellan) was dressed more as gardeners boy than head gardener of a grand estate, and Cliff Wongs foppish Basilio was more caricature than character. That said, both made good efforts to overcome these handicaps..

The super-elegantly dressed page boy Cherubino was played by Courtney Bridge as a cheeky, irrepressible teen-ager. Both her arias,' Non so più cosa son' and 'Voi che sapete che cosa è amor' were performed with clarity and excellent articulation, not to mention charming sincerity.

Duncan Watts-Grant parlayed a warm, velvety bass and an antithetically austere demeanour into a subtly comic Dr. Bartolo and injected some slightly risqué humour. Suzette Janse van Rensburg was all facial grimaces and spiky coloratura as Marcellina but warmed up with her characters about-face from spiteful harridan to loving mother. In fact the whole cast seemed more at ease as the opera progressed..

Micah Schroeder demonstrated a nice awareness of style and clearly grappled with Count Almavivas inner psychology. He became increasingly angry and frustrated, leading up to a moving Contessa perdono! Emotionally expressive singing from Natascia dellErba declared the depths of the Countesss unhappiness as well as inner strength. She rose bravely and winningly to the challenges of 'Porgi, Amor' and 'Dove sono i bei momenti' and in the final scene her touching forgiveness of the Count was delicately done.

Of the many comic moments, perhaps the best was the presentation of flowers by the village girls to the Count. Outraged by his behaviour they thrust their bouquets at him like blows while he could do nothing but accept them as favours. A pleasure to behold, as was the entire evening.

This production was dedicated to Irving Guttman, who died in early December. Founding artistic director of Vancouver Opera, he was in particular a benefactor of UBC Opera.