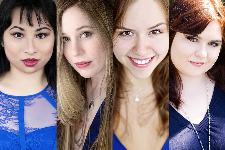 The tiny Minoru Chapel hosted some big voices and selections from a list of Operas greatest arias for womens voices with Opera Mariposas latest offering.

Four young women, all in the early years of their careers, presented a program of opera arias drawn chiefly from the 19th century with a seasoning of 18th and 20th century music plus an aria so new the opera is not yet finished.

Opening with the light and sparkling Saper Vorresti, from Verdis Un ballo in Maschera Robin Eder- Warren immediately introduced a rewarding performance, dramatically aware and meticulously sung, that would be maintained through the evening. She was followed by Kathryn Nickford performing the lyrical Willow Song from The Ballad of Baby Doe and, upping the ante, Jacqueline Ko who blazed out Vissi darte, vissi damore in true prima donna style. Allison Cocianis long, expressive lines in Almas Solitude reflected a more modern sensibility which promises well for her new opera, Alma, about a girl with special powers.

Although the same sequence of performers was repeated, all the pieces were solos, and there were no low voices, variety was not lacking, each singer bringing an agile voice, thoughtful musicality and her own distinctive character to her interpretation. Jacqueline Kos vocal weight and dark colour lent fierceness to Lady Macbeths Vieni taffretta! and contained fortitude to Lius Tu che di gel sei cinta. Robin Eder-Warren, an excellent comic actress, has a cheeky sense of humour which added zing to Stizzoso, mio stizzoso from Pergolesis La Serva Padrona and zest to Mozarts Suzanna in Deh vieni, non tardar. Still keeping the comedy, but subduing it to other ends, she performed Caro nome, Gildas joyous contemplation of her anonymous admirer, sprawled on her back. She confessed to having borrowed this from Simone Osborne.

Kathryn Nickford has a high sense of theatre which she brought to all her arias and especially to Fiordiligis Come scoglio which she took as a straightforward expression of steely devotion, full of dramatic intensity. She added to O mio babbio caro, a shining, melodic gem, a layer of comic suasion that would soften any stern fathers heart.

The final encore, Mozart's dazzling aria for the Queen of the Night, "Der Hölle Rache kocht in meinem Herzen," was sung by all four singers in chorus, passing the phrases from singer to singer with sure-fire accuracy. Dazzling, yes - and fun.

Andrew Kellett provided spot on accompaniment and support. Several changes of elegant and operatic costumes added a colourful array for the eyes to the feast for the ears.

All the singers were full of personality, confident and technically assured. The arias were well thought through, leading to a most rewarding concert.