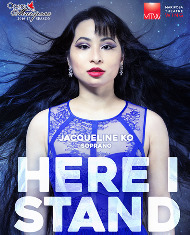 Soprano Jacqueline Ko has played many heroines on the opera stage, but I would venture that none of those heroines are braver than the one she plays in her own personal production of Here I Stand – herself. Ms Ko has assembled a collection of classical arias, show tunes and popular songs that tell her story of her fight against Myalgic Encephalomyelitis. In terms of divergent music styling, there is certainly something in the show for everyone to enjoy.

Wearing a turquoise and purple floor length gown, Jacqueline Ko together with piano accompanist Angus Kellett kicked off the show with “Laurie’s Song” from Aaron Copland’s folk opera The Tender Land. Ko interspersed the songs with a passionate (though not maudlin) narrative of how her illness has impacted her scholastic and social life.

In the beautifully rendered Vissi d’arte from Giacomo Puccini’s Tosca, the singer asks “why should I be rewarded this way.” A highlight from the first set was Tom Kitt and Brian Yorkey’s poignant song “You Learn to Live Without” originally sung by Idina Menzel in the stage musical If/Then. The song informs about all the simple things that must be learnt: “You learn to speak so calmly when your heart would like to scream and shout. You learn to stop and breathe and smile.”

Returning to the stage after an intermission in a royal blue floor length dress, Jacqueline Ko started the second half of the show with (what I felt was) an unusual choice. “The Song Remembers When” is a slow country ballad written by Hugh Prestwood that relates how music can instantly trigger a memory that had been long forgotten.

Another surprise – a really pleasant one – was a pair of songs from the Broadway musical Hamilton. I hadn’t previously heard either of these songs, but I was impressed by the sheer musicality of “Wait for it” and “That Would be Enough.” In performing the former, Ko was joined on stage by special guests including sister Stephanie providing backup vocals.

The singer ended her show with a generous encore. While Ms. Ko interpretation of Annie Lennox’s “Into the West.” was different, members of the audience likely recognised it as the end-credit song of the film The Lord of the Rings.

Here I Stand is billed as a benefit & awareness show intended to bring attention (and hopefully help) to those unfortunate to suffer from Myalgic Encephalomyelitis/Chronic Fatigue Syndrome. Yes, it is a mouthful. Likely only those enduring the debilitating symptoms of the disease could explain much about it. Jacqueline Ko has been suffering from its effects since age ten. Not surprisingly, the cause is something very close to her heart. All the music featured was chosen by the singer to represent a particular stage in her battle. Because of the emotional demands there was only a single performance – too bad!