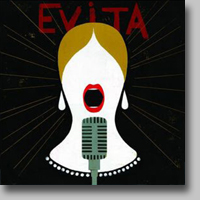 Fantastic show! A standing ovation on opening night, and a prolonged applause for Caroline Bowman (Evita) who delivered her songs with operatic exquisiteness in her soprano voice. The other leads were also fabulous. Ramin Karimloo (Che). sounded more Broadway than operatic, but still delivered with emotion and passion. Magaldi (Cooper Grodin) and Peron (John Cuida) were superbly operatic in their tenor voices.

This biopic of Eva Peron is almost non-fictional; what makes it mostly fiction is the intrusion of Che Guevara who narrates her life story and even intermingles in her private life. Che would probably have been in those labour union rallies, as he was a univrsity student during the Peronist years.

What was going through my mind as I was watching this musical, or in this particular case, a fusion of opera and Broadway, was the similarity to Jesus Christ Superstar, the first collaboration between Rice and Weber. The comic musical chairs scene of the Colonels of the military junta is similar to the Pharisees plotting Christ's death. I also imagined Che as Judas, the anti-hero, with his singing just like in Jesus Christ Superstar. And my imagination went further with Evita is Magdalene. In fact, the song "Don't cry for me Argentina" rings of "I don't know how to love him".

In a past review, I commented on how opera houses these days, including New York's Met, is now including Broadway musicals in their repertoire all for economic reasons. The younger audience go more for Broadway rather than the classics of Verdi and Puccini. Although I would disagree as I believe opera should remain opera, that's how the ball rolls especially if Economics comes into the picture.

The plot takes place in the politically turbulent 1930s and 1940s, Evita follows the illegitimate Eva Duarte’s remarkable journey from small-town slums to the tango clubs of Buenos Aires, through a career in B movies, and to the presidential palace on the arm of her new husband, General Juan Perón. The work first began life in 1976 as a concept album, between composer Andrew Lloyd Webber and librettist Tim Rice, just five years after their first hit, Jesus Christ Superstar.